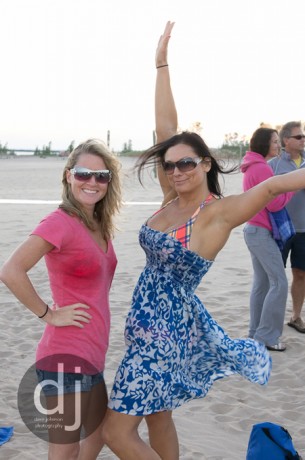 BY :: LIAM ON THE LAKESHORE
PHOTOGRAPHY :: DAVE JOHNSON

On the longest day of the 2012, those who Love Muskegon watched the Summer Solstice sun descend at Pere Marquette Beach.

Linda Medema and Katie Trzaska have dedicated their careers to the love of Muskegon. Linda Medema serves on the team that manages the Frauenthal Center for the Performing Arts, a vast complex that can host three concerts in a single night, the largest event in the restored Michigan Theater, built in 1929, with seating for 1700 people. In November 2010, the City of Whitehall tapped Trazska to manage the 400 seat Howmet Theater in north Muskegon County, a position that came open when the Sable Points Lighthouse Keepers Association asked Cindy Beth Davis-Dykema to keep watch over the lighthouses managed by the association. Davis-Dykema has exceeded expectations, adding the White River Lightstation to the association while assisting Trzaska in growing youth theater programs at the Howmet. 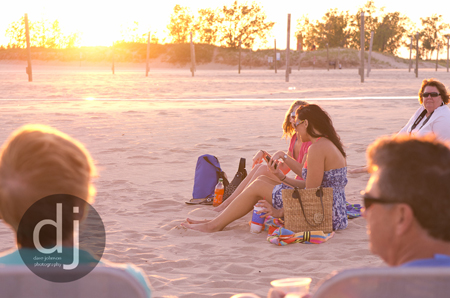 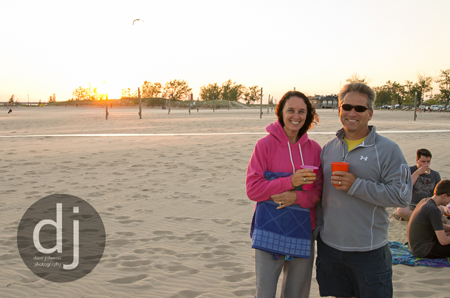 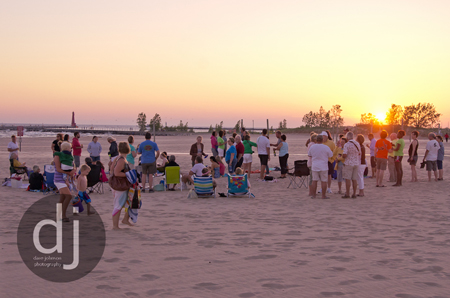 All of these lakeshore treasures are never far from the mind of the Community Foundation of Muskegon County, who has diligently searched for programs to share the resources of Muskegon with all residents of the county and the thousands of visitors who arrive each year. The foundation found Peter Kageyama, a consultant who sparked the Love of Cities movement with his book, For the Love of Cities, and in December 2011, Kageyama’s message inspired thirteen local professionals to dare the cold waters in swimsuits, bearing high letters spelling out their passion: “LOVE MUSKEGON”.

The foundation brought back Peter Kageyama for a second engagement, early in the warmer month of June 2012, and added the team of Peter and Michelle Royal. The Royals have become in demand around the TEDx circuit for their ability to facilitate audiences and record ideas in a living work of art called a graphic recording. The graphic recording from the Love Muskegon sessions has found a place in the plate glass windows of the Frauenthal lobby, close to the statue of Buster Keaton, a summer resident from the years of the Actors Colony, 1908 to 1938, in the dunes of Bluffton. Teams in the audience were challenged to create rituals for Muskegon, and Medema and Trzaska asked their team to hold a “Toast the Sunset” event at 9:28 PM on Wednesday, June 20th, 2012, and the team rallied behind the idea. So as evening came to Pere Marquette Beach, visitors found Trzaska waving a sign in welcome and Medema explaining the idea to over 120 guests, assisted by a bullhorn.

A few groups brought fancy cheeses and crackers to enjoy before the sparkling, alcohol free Catawba toast. One group sprinted for wind chopped Lake Michigan to dive in before the sunset. Bluffton resident Kara Olson, a management consultant once based in Los Angeles, taught her sister’s children the fine points of beach volleyball, the two children recent arrivals from Texas. The Love of Muskegon has existed for decades, with Native Americans of an Ottawa village greeting European setters in 1837. Joe and Jane Catey have celebrated their love for decades of Pere Marquette Beach sundowns. Wednesday night, the couple observed their 53rd Wedding Anniversary on the concrete porch of the bath house, facing sundown and sharing cake and cheeses, using a walker as an impromptu picnic table. The couple have loved Muskegon by raising their children in a home on the beach and leading local organizations, such as the local educational team called Darling Cetaceans. 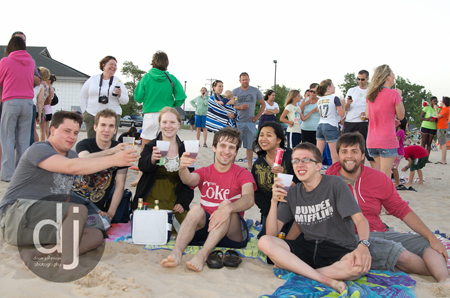 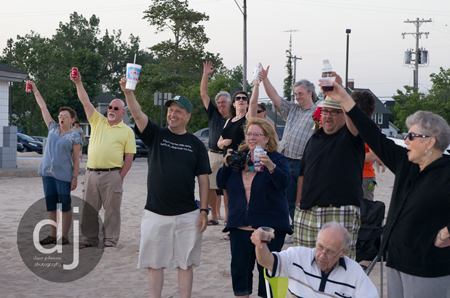 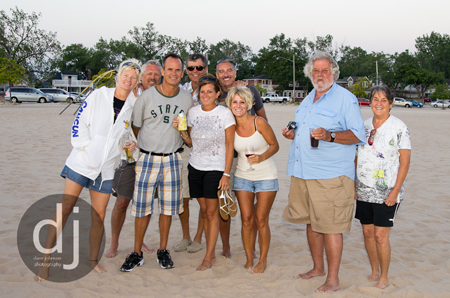 Tom Whitehead and his wife Donna have sailed Lake Michigan from the channel of Lake Muskegon for years. Whitehead explained that clouds make the Muskegon sunset spectacular. He enjoyed his experience watching the sunset celebration in Mallory Square during his visits to Key West, but the cloudless skies failed to diffract sunlight into purples, blushes and mauves. As a man of the sea, Whitehead quickly pointed out the position of the sun above the twin piers of Muskegon harbor, and explained how the sunset travels towards Holland after the Summer Solstice, a journey of 66 degrees from West-Northwest to West-Southwest. The couple knows how to keep a community on course, and the two have participated as community foundation ambassadors, a donor leadership group of the Community Foundation for Muskegon County.

A bank of clouds along the north horizon caused a last minute adjustment when the blazing sun set behind them minutes before the official time of 9:28 PM. Thus, Medema and Trzaska accepted an idea from the audience. Toast the sun’s disappearance and toast again when the official time arrived. The people drank to that idea twice. The twilight lasted for more than twenty minutes, and since everyone had at least a cellphone camera, hundreds of pictures of friends and family standing close together rose up to the stars and out onto the Internet. As soon as the sun had officially set, the Freighter Manitowoc set forth from the channel for Holland and Chicago, a fact confirmed by Lieutenant Mark Taylor of the Muskegon Fire Department, the Muskegon correspondent for BoatNerd.Com, an online periodical based at Port Huron, Michigan’s Great Lakes Maritime Center. A first responder trained as a rescue diver, Taylor shows his love for Muskegon by keeping a unblinking eye on Lake Muskegon and the big lake. 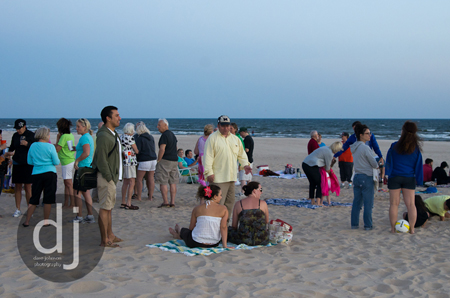 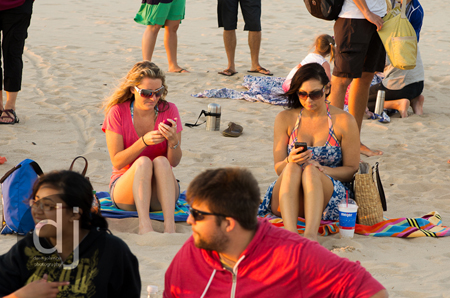 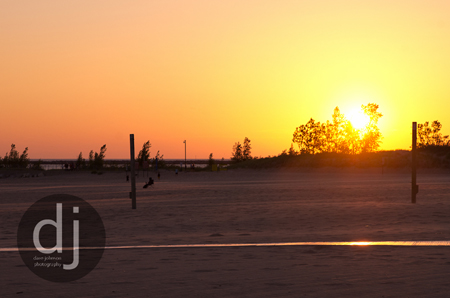 Dogs are cherished in Muskegon; however, our best friends were asked to bring their human friends to a Canine Solstice on the Dog Beach south of Pere Marquette, a second park called Kruse Park. Canines have welcome to play, swim and cruse the strand of beach below a length of dunes that hosts a complex system of dune walk trails. The dog beach extends from north Kruse Park to the Beach Street curve. Chris Willis organized the Canine Solstice, a woman who moved her family to Muskegon from a blueberry farm in Nunica to enjoy the dog beach.

When she learned that the city was considering the closure of the dog beach, Willis organized the Friends of the Muskegon Dog Beach to avert the crisis. Willis operates a human performance firm, Media One, in Grand Haven, providing human resource consulting to Amway and Hewlett Packard. Attracted by event, Photographer Joe Gee brought his camera and his dog Happy and captured the fun as Happy led him around. Gee specializes in lakeside photography for canines and their humans; also, he has documented the eagles of Mona Lake and the flooded Celery Flats. Willis’ passion for making the dog beach a home for all four-legged friends has paid off for Muskegon. Painter Topher Crowder, an adjunct professor at Schoolcraft College in Livonia, purchased a beach front home for his family and their dogs. Crowder has taken up painting Alfresco on the dog beach, a series of paintings he plans to exhibit in handmade frames.