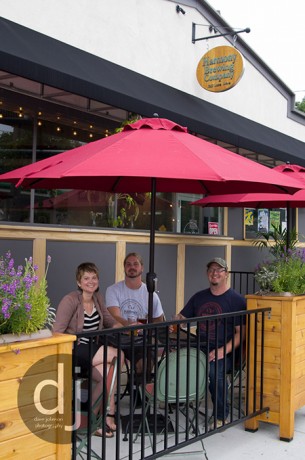 While an undergraduate at Calvin College, Jackson Van Dyke’s route to class took him past an unoccupied storefront in Eastown, an eyesore in an otherwise thriving area. Little did he know, years later he and his two siblings would transform the former liquor store into a hip addition to Grand Rapids’ blossoming brewing culture.

Though it wasn’t easy. 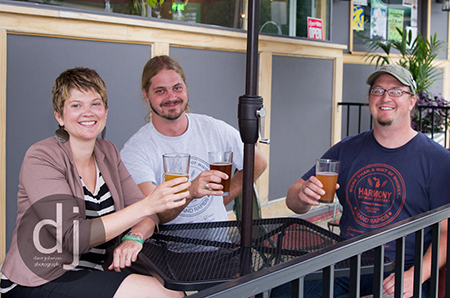 “It was miserable,” Jackson admitted of the process of turning the long-empty Little Jack’s Corner into Harmony Brewing Company. Heather, Jackson’s sister and one-third of Bear Manor Properties, the property management company the pair along with brother Barry, nodded in agreement while the duo sat in a booth inside the brew-pub.

“It feels awesome sitting in the finished space. It’s so gratifying. I remember the first time when we opened hearing people laughing and talking instead of me cursing,” Jackson joked reflecting on the February opening.

As the eatery and brewery – now known for its wood-fired pizzas and unique craft beers—opened for lunch, the brother and sister described the process of renovating the space and bringing a dream to life.

Jackson explained initially they were going to develop the property in the same vein they had with other properties Electric Cheetah and The Meanwhile Bar in the Wealthy Street Business District, but decided if they could secure financing they would make it their first solo venture.

“We were always a little sad to step back from projects,” Heather added describing how they felt after tenants took occupancy of the spaces they’d spent time redeveloping. “And Jackson and Barry had been home-brewing for ten years, we decided to give it a shot.”

The siblings were used to doing their own renovation work, in fact it was how Bear Manor got its start. Barry, the siblings’ father, approached the two sons about residential renovations while the two were working as painters. “We began with a house in Heritage Hill, a fixer upper,” Jackson explained. 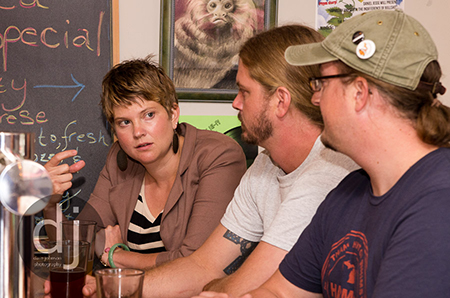 After restoring the home, the men refinanced it, rented it out, and rolled the profits into the next project. The men formed Bear Manor Properties LLC, and while both of the brothers had no previous business experience – Barry had a philosophy degree and Jackson a degree in biblical studies – they moved forward with a vision for transformation.

Jackson said he was working on a three-unit property near Wealthy Street when the opportunity presented itself to become part of the area’s revitalization. He explained he had heard rumors of a few residential units being for sale, and when he approached the owners he was offered the option of a commercial property instead.

The property was 1017-1019 Wealthy Street, owned by Community Rebuilders, a non-profit agency dedicated to ending homelessness and creating safe affordable housing opportunities in Kent County. “It worked out really well because we bought it and immediately leased it back to the owners,” Jackson said.

Then the dominoes began to fall. “We’d seen how Wealthy Street Bakery and Art of the Table had found homes on the Wealthy, and Wealthy Theatre was also making moves further east. We wanted to try and help fill the gap in between,” Jackson said. 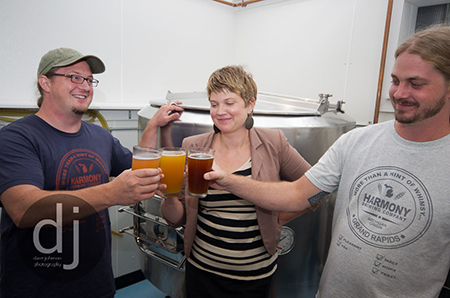 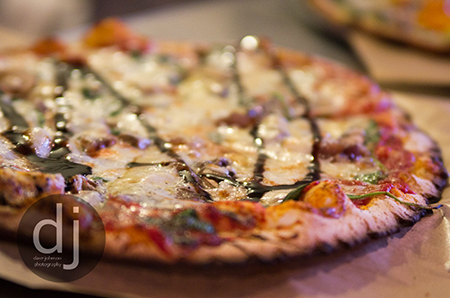 During the same period, the Van Dykes bought and renovated two other commercial spaces on the block, creating homes for The Meanwhile and Electric Cheetah. The 1017-1019 property is now home to Brick Road Pizza and the block is popular hang-out for college students and young professionals. 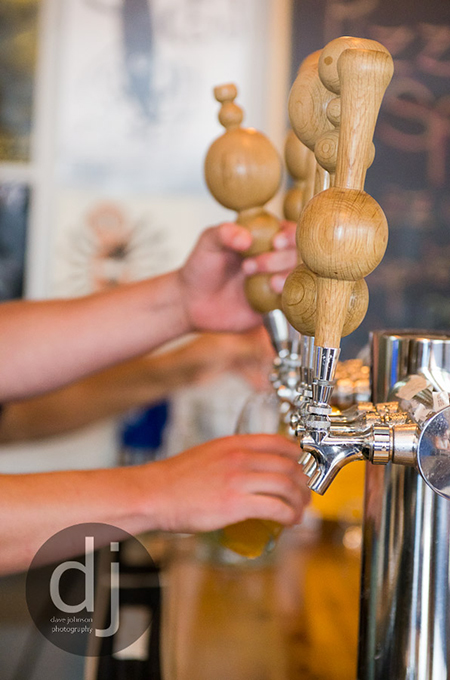 “It was a borderline ghost town when we started. It’s the broken window theory, if you keep up on an area and make it beautiful it has a positive impact on the way people view their surroundings and their lives,” Jackson said.

Heather agreed. “It was awesome to be able to be at the beginning of the new wave of reinvestment. You can see the impact of the things that we were able to do and that other people were able to do, and the impact for business owners that had been there for 30 years and stuck it out.”

Through it all, the Van Dykes remained committed to creating spaces that were positive for everyone involved, from business owners to the residents. “We knew we wanted to find tentants that would be right for the spaces and right for the neighborhood, and we worked really hard in figuring that out,” Heather explained.

Heather’s background included a stint in New York working for an organization that worked with migrant farm workers. Her job was working with the children of the farm workers living in rural areas and helping them get access to resources that may not be readily available.

As property manager and community liaison, Heather’s role includes serving on neighborhood boards and ensuring the company’s connection with the community remains strong. “You can make a positive and a negative impact on a neighborhood based on real estate choices,” she said. “We, of course, want to be positive.”

The team said they’re proud of the work that’s been done in the area. “There are people out at 10 at night. There are women jogging by themselves. That never happened before,” Jackson said.

He also stressed that the changes in the area haven’t happened solely because of good development work. “You can put a really nice building in, but if the residential is falling apart or vacant, it’s not going to have the same impact,” he said.

Currently, the team has a number of residential units occupied by students living in intentional communities. “They’re more than roommates. They want to be intentional about making a community amongst themselves – eating together, really forming relationships, doing things together within the wider community,” Heather explained.

The siblings have also carried this emphasis on community into the work they’ve done with Harmony. Though Harmony is a brewing company, the Van Dykes strive to create a family-friendly atmosphere. “We want people to bring their kids here,” Jackson said.

Additionally, although the own unique fleet of beers are created in the basement taproom, Harmony is also open to featuring guest brews by other home brewers. “We want to have a place where home brewers feel at home,” Heather said. 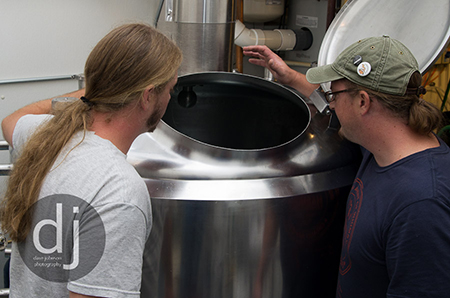 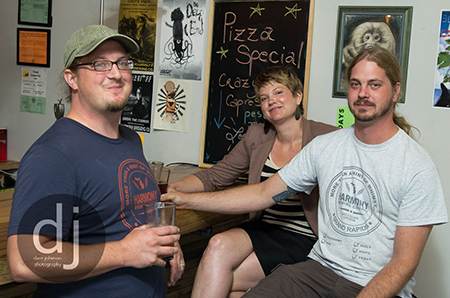 Having the guest taps also adds to the feeling of surprise that comes with the pub’s ever-changing beer offerings. “We try and have a range of styles on tap. Every time someone comes, it’s going to be different,” Jackson explained.

Part of this is also due to the tempermental nature and artisanal approach of home brewing, Jackson explained. “Beer is a living organism, and if it’s not done and takes an extra two weeks, you can’t do anything about it.”

Jackson and Barry’s passion for beer combined with the trio’s emphasis on community in unique way under the guise of a new lecture series Black Squirrel University, hosted at Harmony every Tuesday night.

In a moment of frustration, Jackson and Barry left their office, cracked open a few of their home brews and began reflecting on times past. Jackson said, “We were saying ‘I kind of miss college. I miss sitting in a room with an expert, and wouldn’t it be more fun to drink a beer at the same time?”

Heather added, “You don’t realize what a great opportunity it is to sit in a room and listen to an expert in a field.” With Black Squirrel University, she said they aim to feature topics ranging from scholarly to practical. “We want to be a part of the fabric of what’s happening in the city.”

A city that the three siblings from Chicago agree has been the perfect place to flourish, especially for young people. “This is a really entrepreneurial town,” said Heather. 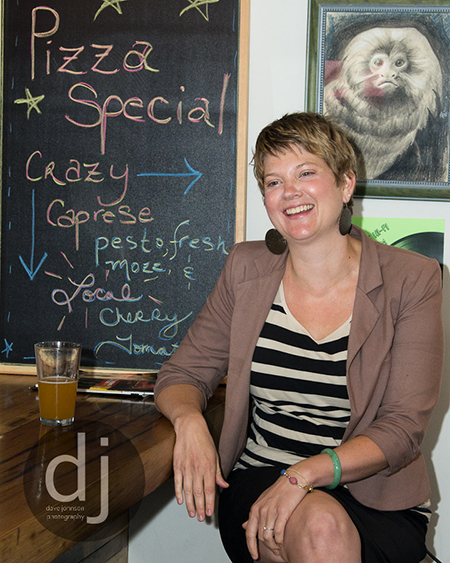 “People are proud to be a part of Grand Rapids. Although the economy is tough, especially in Michigan, everybody feels hopeful and is really excited because they see the things that can happen. People have a vision about what they want this state to be and they’re going out and doing it.”

As the first customers begin filing into the eatery, Jackson and Heather take turns greeting guests and directing them to sit wherever they like. “It took us a little bit to get used to,” Heather said of overseeing daily operations. “But our staff is fantastic.”

And as for sibling squabbles? The two exchange grins and say with a humbled confidence, “Of course. We’ve been doing this for a while.”