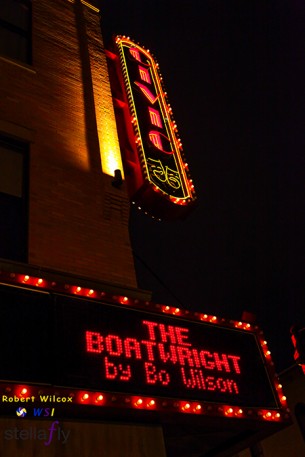 ‘The Boatwright. Only two actors and the entire story takes place in the garage around a boat. A really good story.” — Robert Wilcox, while photographing dress rehearsal.

With over 38 plays under his belt, professional award winning playwright, Bo Wilson, is no novice to the stage. His current play, The Boatwright, is making its premier debut for the first time on any stage in Grand Rapids at the Grand Rapids Civic Theatre. Starting this evening, Sept. 12, 2014, this new play arrives in our community just in time for the ArtPrize kick off. Although this play is not considered an ArtPrize entry, it’s another wonderful new addition to the art world and will be showcased on the Civic Theatre’s stage.

The Boatwright is a 2 person, 3 character play about a widowed retired police officer, Ben, his neighbor’s son, Jaime, and a boat that they set out to build together. All three characters create an unexpected bond all while discovering the trials and tribulations of building a boat fit to sail across the Atlantic Ocean. 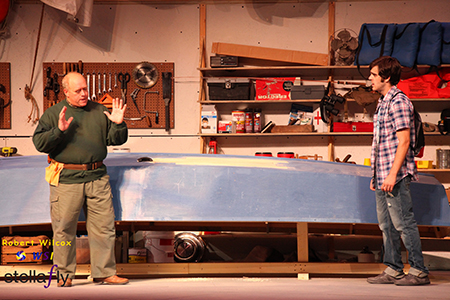 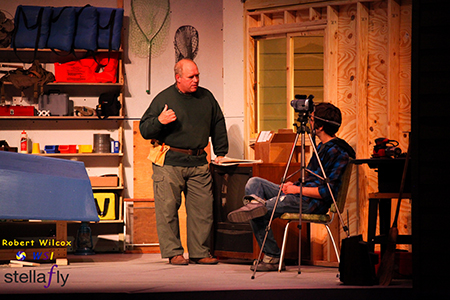 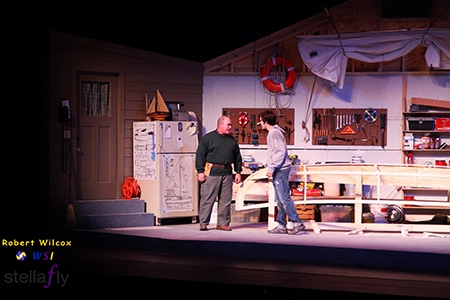 “At some point in everyone’s life we all want a boat, we all are looking for a way to get away,” according to Wilson. “At the middle point of many people’s lives they feel compelled to push themselves, some run and some take up boating.” says Bo.

Although I don’t consider myself quite middle aged yet, I can certainly relate to reaching a point in my life and asking, is this all that I am ever going to do?  Is this the life I want to be leading? About two years ago I took up running. Like the main character, Ben, in the play, I felt the need to push myself, look at the world from another vantage point.

Wilson purposefully made his characters generationally different instead of portraying them as peers because he felt they’d be more interesting to the audience. He wanted to create the dynamic between an older, middle class personality and a younger, technology driven young man for an interesting contrast. Wilson says,“ The play is funny but not a comedy.” The audience is sure to see many humorous nods at technology and how its effect shows up in these two characters from different generations. 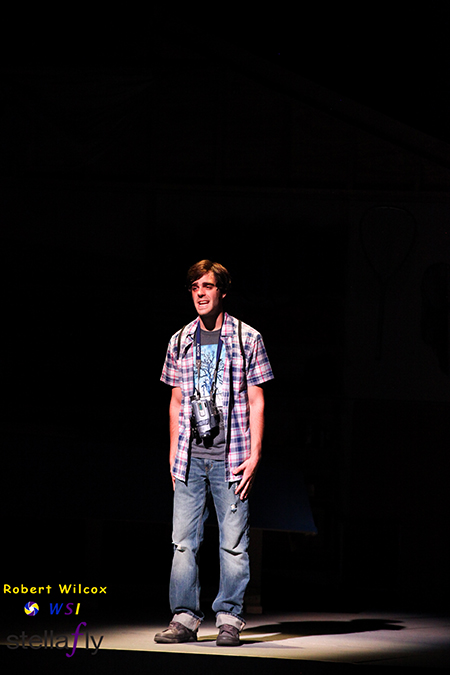 The third character of the play is a boat. Five different boats were designed and created for Civics’ production of The Boatwright. Nancy Brozek, Civic Theatre’s Director of Development and Community Relations said’ “The boat is an interesting anchoring point between the two men.”

While Wilson’s own experiences with boating does not go much beyond tooling around once on a 10ft sea snark of his own and reading Treasure Island. He too can relate well to the character relationship dynamic because his own son Zack James, was 15 when Wilson wrote the play.

Civic Theater is known for amazing 60 plus person casts staring in larger than life exuberant musicals and Bruce Tinker, the executive and artistic director, hopes to bring another flavor to the stage with this two person cast play. The same amount of researching went into their decision to bring Mary Poppins and South Pacific to the stage.  This year’s dedication to a terrific season,

“Grand Rapids has been wowed with many well-known musicals and plays and the Civic Theatre hopes that its community continues to trust us to bring less known, but just as talented art to the stage that will entertain them.”, says Tinker. Wilson’s goal is to have his audience enjoy the characters, Ben and Jamie, because he wrote them to characters that might be a guy you know.

For upcoming performances: The Boatwright runs now through September 25th.
For tickets: http://www.grct.org/memberoptions.html