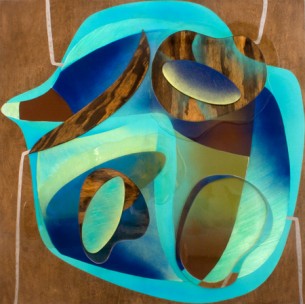 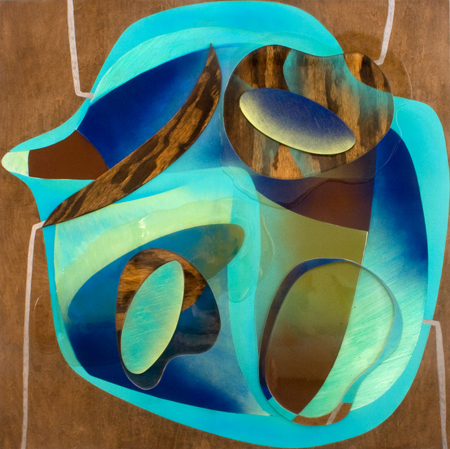 If you are looking for a ticket to the 100th Anniversary Gala at the Muskegon Museum of Arts, June 9th, 2012, a wait list for cancellations has already been started. The supporters of the museum had first option at those tickets, receiving invitations addressed by a calligrapher’s hand. The base has been very active. Fulfilling on a seven year plan, the supporters of the shoreline art museum have risen to the occasion by donating 114 new acquisitions, “pictures of the best kind”, far exceeding expectations. Works by Annabel Livermore, Geary Jones and Frank Connet, all subjects of major exhibits in the last five years, will be available for viewing in 2112, among artists of significant reputation.

Last Thursday, the museum opened its regional exhibition to the public, the longest running regional exhibition in Michigan. In honor of the centennial, the 84th Annual Exhibition opened the competition to all Michigan artists. Over five artists answered the call from the Detroit metropolitan area, and 361 artists hand delivered 633 works of art to the downtown museum, almost 100 more works of art than the 83rd Regional Exhibition received.

The Regional Exhibition for the Festival of the Art received 75 more works of art as entries than Muskegon, 708 works of art compared to 633. Spring has been a good season for art in West Michigan, with 1341 works of art showing up for the consideration of four busy jurors as ArtPrize matches artists to almost 200 venues. Andrew Winship of the Herron School of Art and Design in Indianapolis reviewed all the works of art for the Muskegon show. In Grand Rapids, Tim Fisher, Lora Robertson and Ron Pederson performed the honors, Fisher for painting, Robertson for photography and Pederson for three dimensional and multi-media works. Many artists had the honor of exhibiting in the two regionals, including ceramic artist Maggie Bandstra of Grand Haven. 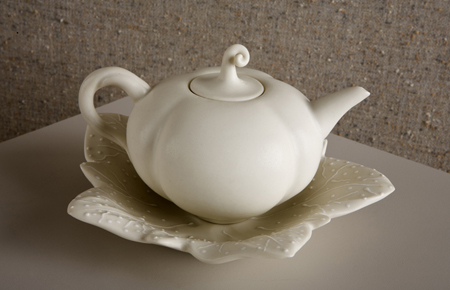 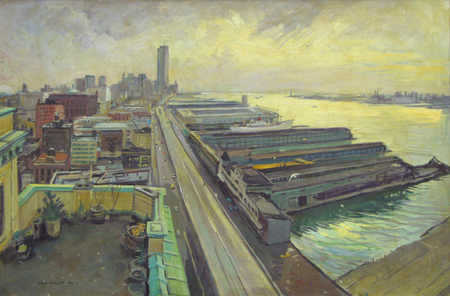 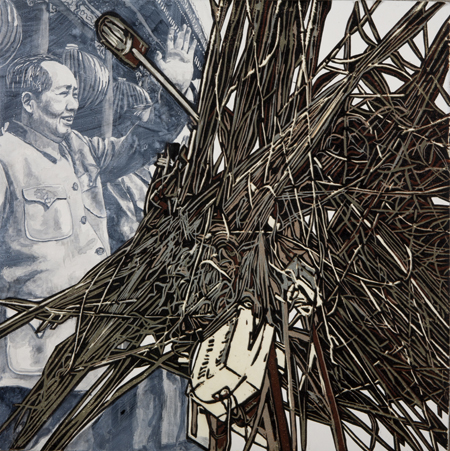 Two men on a lean team of art professionals often described as “consummate”, Preparator Keith Downie and Collections Manager Art Martin made it possible for Muskegon to exhibit 217 works in 2012, 24 more than 2011. With a team of handy locals, the two built a curved center wall in the museum’s extension for the 56 paintings from the Smithsonian American Art Museum, a show titled 1934: A New Deal for Artists. The intake team led by the pair have made it possible for the Muskegon Regional to continue a live intake, kicked off by a Thursday May 10th, 2012 salon where scores of artists carried in their works of art, which the preparation team displayed salon style. Volunteer William L. “Bill” Rogers assisted by carrying larger works up the stairs. Theologian Michael Robertson, also known in musical circles as Mandolin Mike, brought in two portraits he had painted as a student at an art school in Muskegon’s lakeside district for the Thursday salon, but declined to leave them for jurying into the exhibition.

The exhibition welcomed the public with Shell, the Best of Show entry by Michael Pfleghaar on the first wall, its arcs in turquoise accented by the Indiana limestone curves of Jason Quigno‘s sculpture, Open Flight. Picking up the theme of curvature, Jane Horn‘s Smokin’ featured a pastel still life composed of a fish bowl and a round orange viewed through the bowl. Pfleghaar’s AHA, a study in red, was placed as close as possible on the back of an adjacent wall, an image made popular during Pfleghaar’s GRAM exhibit, Reinforcing Objecthood, on view during the reign of Rauschenberg in Grand Rapids.

Although hard to pin down, the scheme of the exhibition placed works in topical groups, with historical muralist Larry Blovits anchoring a wall of portraits with a pastel likeness of Mary Rademacher. Missy Morrow carried the theme of birds with an acrylic work entitled Michigan Songbird Mandala, presenting a score of bird miniatures. I.N.R.I. – In Need of Rescue Immediately by Nancy Wanha of Cedar Springs continued the avian theme, presenting a headdress of eagle feathers, and gave a Native American presence to the regional, supported by the work of Jason Quigno. 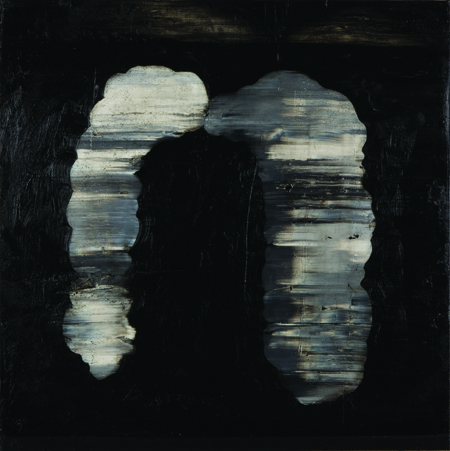 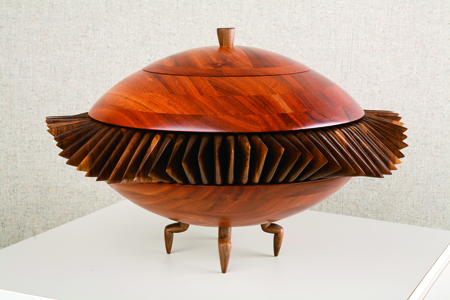 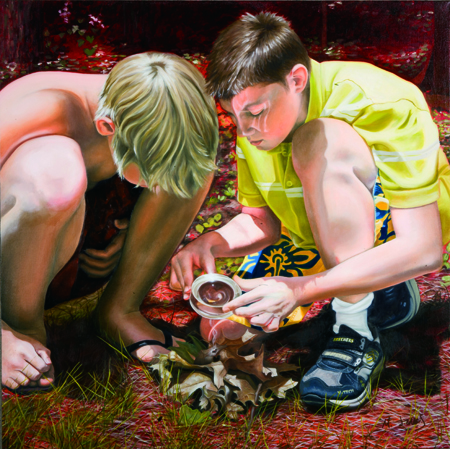 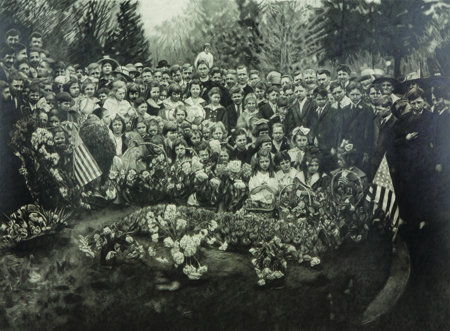 The Muskegon regional must be viewed with an eye to connection. Chris Laporte’s Funeral Drawing, a work of pencil on paper, connected the show to last year’s ArtPrize. Nick Antonakis‘ oil from his Tour Bus to Athens series connected to Grand Rapids Community College, where he has taught, and to the Newaygo County Artsplace, where he exhibited the series in depth. Photographer John S. Zielinski displayed a photograph titled, My Homestead, that featured his favorite model, his wife Sarah Zielinski amid a vegetable garden on their ancestral farm. In My Americana, Missy Morrow celebrated her home of White Lake by depicting a classic car cruse on the road connecting Montague to Whitehall, with the illuminated sign of Dog-N-Suds and the spire of Ferry Memorial Reformed Church visible. Kathleen Putnam depicted model and fitness entrepreneur Audria Larsen wearing a hat of tropical fruit, probably an image captured at a session of Dr. Sketchy’s Anti-Art School. Richard Brinn immortalized Lee S. Brown in an oil portrait. Brinn, a member of the Cass Corridor art movement in Detroit, has assisted the museum with an annual art auction, Fresh Art Live. Brown has served Muskegon by spearheading the preservation of the Hackley – Hume historical homes and the statues in Hackley Park.

Wildlife artist Catherine McClung exhibited a watercolor, the Front Room, and her husband contributed an office table in exotic woods, Sapele Scoop. Listed Not for Sale, the McClungs reconsidered when the Community Foundation for Muskegon County selected the table in Sapele wood for a purchase award, to be on display in the Frauenthal Center offices for good, forever. The relationship between SPX Corporation and Muskegon’s cultural life was evidenced by the corporation’s role as the 100th Year Centennial Partner and Patrick J. O’Leary‘s five purchase awards, photographs that all were listed originally as Not for Sale. The museum has encouraged volunteers and patrons to fund awards, and allows the sponsor to award them at the podium personally. Henry Matthews, Director of Galleries and Collections at Grand Valley State University, attended to award John A. Knudsen the purchase award for Sharp Curve, an oil on canvas. Visitors to the exhibition, which runs until August 8th, 2012, have the opportunity to vote upon the People’s Choice Award, selected by ballot. On the official 100th birthday of the Muskegon Museum of Art, June 21st, 2012, the award winning artists shall greet patrons among the regional exhibition and discuss their works, an annual tradition. 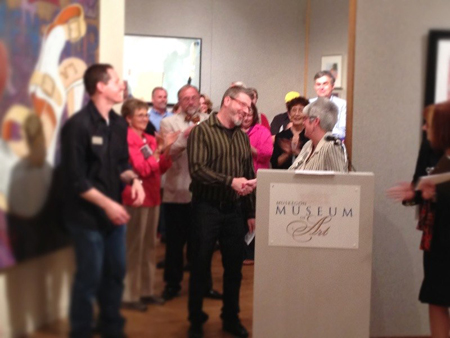 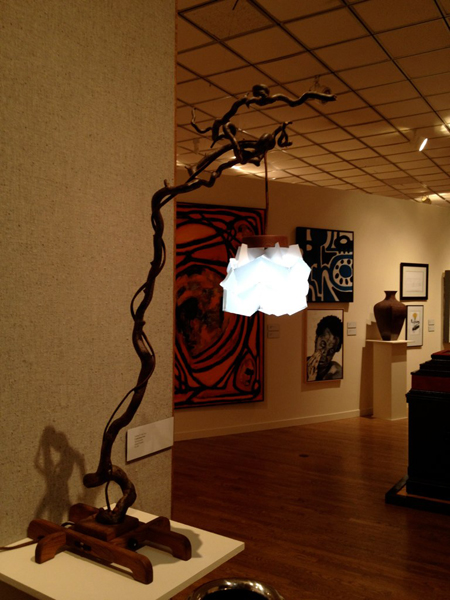 CODA
In 1998, Hoby Thrasher consulted Interior Designer Tylor Devereaux on the concept for a restaurant to be called the Sardine Room. Devereaux referred Thrasher to Michael Pfleghaar, whom Thrasher visited in an undeveloped industrial space in Grand Rapids. Thrasher commissioned the artist to paint a Picasso inspired mural on the barrel ceiling and construct several post-modern sculptures as chandeliers for the space. The muralist painted for more than three days and suffered a stiff neck while working on the ceiling. On Thursday night, as Pfleghaar accepted his Best of Show award in person, Thrasher worked on the redesign of the Sardine Room space, which still features Pfleghaar‘s work. Thrasher has cut windows into the north and west walls and plans a tap room environment. Thrasher had in his hands a copy of the 84th Regional Exhibition brochure, designed by Marguerite Curran-Gawron of the museum, to prove that his 14 year long bet on Pfleghaar’s career had prospered.