GRAND RAPIDS — The re-imagination of Fulton Street Farmers Market, the oldest and largest open-air market for local farmers to sell their fresh fruits, vegetables, breads and craft items in the area, is a cultural magnet that attracts more than 10,000 people on a sun-splashed Saturday morning.

The patrons, shopping for the freshest farm-to-table ingredients, come from surrounding neighborhoods on foot while suburban dwellers form an endless procession of cars stretching around the corner at the intersection of Fulton Street and Fuller Avenue on the near southeast side of Grand Rapids. 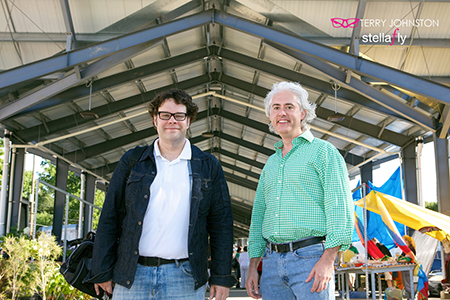 The Farmers Market, which reopened in May, is in the midst of a $2.6 million renovation. The modern amenities include a permanent roof covering the market stalls, improved accessibility and traffic flow and a LEED-certified, year-round indoor building that is scheduled to begin construction this fall.

“It started off with a bang,” said Jeff Dykstra, 45, of J. Dykstra Produce in Byron Center, a family farm that has been selling fresh melons, shucked sweet corn and other items at Fulton Street Farmers Market for more than 30 years. “It’s new and it’s exciting. We’re seeing a lot more first-timers this year, although we’ve been here a long time. I’ve been coming here to the market since I was a kid.

“I think this place has been special for years.”

The special touches seen throughout the Farmers Market feature the unmistakable fingerprints of architects Ted Lott and Greg Metz, whose meticulous planning has transformed this important public space into the perfect blend of functionality and style that fits right into the modern urban landscape.

It is a Lott3Metz Architecture signature design and a passion project for both partners. 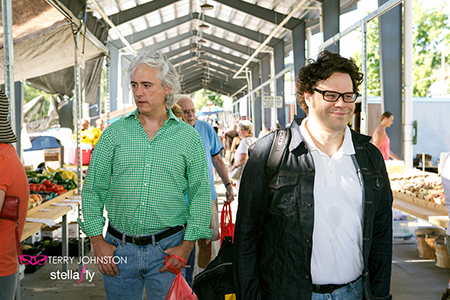 “It is in a lot of ways,” Lott said of the Farmers Market being one of the firm’s proudest achievements. “We’ve been working on it one way or another since 2005. It started out with a planning study from the City of Grand Rapids for the neighborhood. We still have to build the front building (for year-round use) and construction will start on that in September and be done before the coldest of the cold season. It is a critical piece of the plan. For us to have a protect this size coming out of this plan in five years, it’s rare. It really speaks to the commitment of the neighborhood.

“They believe in making things happen and being a high-functioning neighborhood.”

Lott and Metz share a passion for re-purposing existing structures and spaces so that old neighborhoods are brought back to life through careful planning, design and implementation of new strategies.

The Fulton Street Farmers Markets is a strong statement from both of them.

It is a project that had to be merge urban and rural themes — from the brick pillars at the entrance to the plaza to the farmers filling up the stalls on both sides of the structure — for everything to make sense.

It then had to blend into the landscape without appearing like a tourist attraction.

“There were a lot of pieces to that plan that were aspirational, but everybody kept coming back to the Farmers Market,” Lott said of the project’s relationship to the neighborhood. “It’s a successful place where vendors want to come. There’s a seven-year waiting list for vendors to get in there. It has expanded hours. There’s a structure there and a Rapid bus stop there. We’re integrating this project into the city fabric. Everything we did, every decision that we made on that project, had to have an urban justification.

Lott3Metz has earned a proud reputation as an urban problem solver.

It aspires to find solutions within the current landscape where corporate architecture firms might be more interested in self-serving artistic statements or squeezing the last drops of profit out a project.

Lott and Metz insist there is a responsibility to serve these neighborhoods.

Both share the guiding principle that it is important to work where they live and live where they work.

“It’s about understanding the culture,” Metz explained. “We try to understand what it is the client really wants and helping them to see what they really want. Most of our projects are done in an urban area. That’s what we understand. There’s a lot of entities that are directly involved in that.

“If you ignore that , the project is not going to be as successful as if you paid attention to all those factors,” he said, offering the Farmers Market as an example where Lott3Metz got input from a lot of sources. “It’s showing them what works and how it works. We won’t just arbitrarily design stuff. We’re solving problems for our clients. The design reflects that solution. Our job is to make the client realize that.”

It requires a complete understanding of the landscape.

Lott, 45, a graduate of East Grand Rapids High School and the University of Michigan, always wanted to live within the framework of the city. He designed a modern interpretation of an urban townhouse on Diamond Avenue near Wealthy Street, proving that his designs aren’t just lip service.

He and his family reside in that townhouse.

“I want to live and work in an urban environment,” Lott said.

Metz, 44, a graduate of City High School and the University of Detroit, has long had an appreciation for the urban landscape of Grand Rapids. Some of Lott3Metz‘s most aspirational and successful projects are smaller spaces — offices, independent businesses, small restaurants, pubs and nightclubs — that are becoming thriving “hot spots” again without ever having to tear down their structures.

“We’re doing a lot of remodels, renovations and historic preservation projects,” he said. 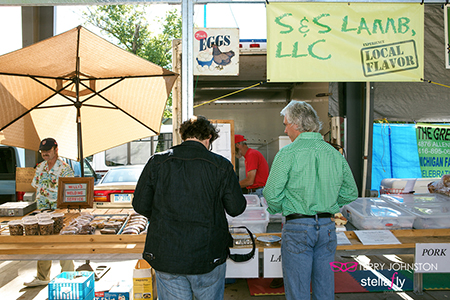 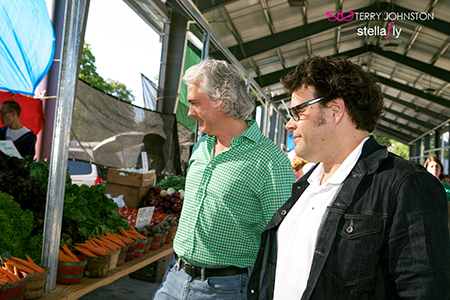 You have walked or passed by several Lott3Metz projects in Grand Rapids.

So is 65 Monroe Center NW, where a combination of housing and urban design is reflected in the exterior of the building, which features a hip outer shell and functional spaces for residential and office use inside.

The firm has designed a Lake Michigan cottage, which is chronicled on its Web site at Lott3Metz.com, projects for Aquinas College and Spectrum Health, re-purposed some local school buildings and spearheaded the Belknap Area Specific Plan to revitalize a north-side neighborhood.

“There’s still a great stock of buildings, even from 100 years old that are itching to be used.”

The re-use of existing structures, which might not appeal as much to other architects accustomed to creating from a blank sheet of paper, is unquestionably Lott3Metz’s comfort zone.

“It’s something we’ve always done as a firm — adaptive re-use and preservation as a tool for urban redevelopment. It’s critical,” Lott said, “so I don’t see us ever not working on things like that, no matter bow big or small, because they’re critical. They’re also some of the best return on dollars when it comes to city building. It’s also the most sustainable way to build — making the best of what you’ve got.

“We’re always going to be doing some of that.”

It’s all part of a plan that reinforces U.S. Census data that shows more and more people are repopulating urban areas following the mass exodus from inner cities to the suburbs in post-World War II economic boom times. 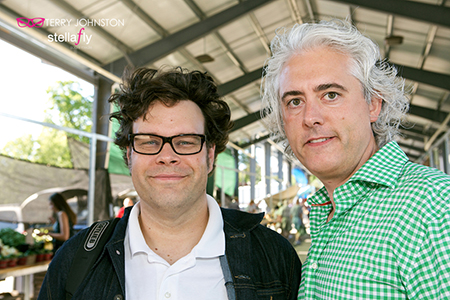 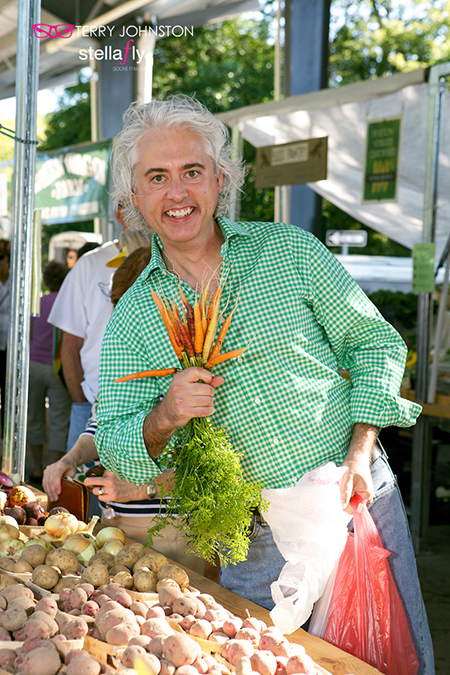 Metz prefers to live in a world where inner cities are sustainable.

“You can walk anywhere,” he said of his interpretation of designing the cities of the future. “You can walk out your door, walk anywhere for a half mile and you can eat and you don’t have to drive. If you’re driving your car, you’re in this box, totally cut off from society. So, for us, it’s creating a place where you walk and meet people and you meet your neighbors and you reinforce that sense of community.

“I still think a lot of people want to live in the city.” 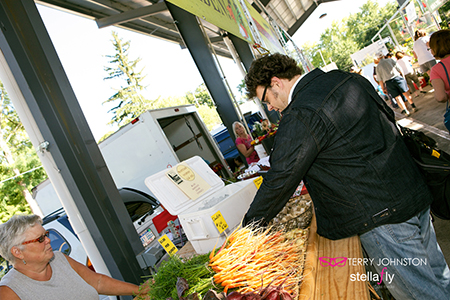 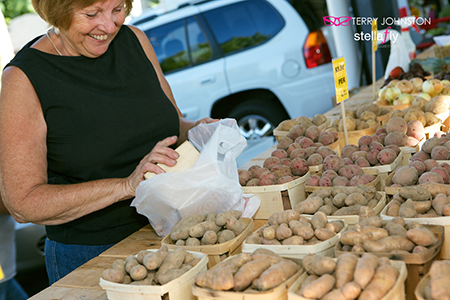 Lott and Metz spent time as corporate architects earlier in their careers.

It just didn’t nurture either of their souls, as both designers or planners who felt like their interpretations of the urban landscape of the future couldn’t be fully realizes unless they made those decisions.

Yet, their partnership wasn’t part of some grand plan.

Their paths crossed shortly after Lott opened Lott3 Architecture in the summer of 2001. His emphasis on innovative urban design in downtown Grand Rapids and building relationships with neighbors and neighborhoods appealed to Metz, whose wife, Jennifer, knew Lott from high school.

Metz joined the re-branded firm in the spring of 2003.

“We were both at similar stages of our career and both had a dissatisfaction with our employers,” Lott recalled. “Coincidentally, I had a lot of work walk in the door at the time and needed some help. And we were off. We both knew we wanted to live where we work and we wanted to work on a city.”

Metz, prior to joining Lott3Metz, was responsible for the design and management of numerous Fifth Third Bank and Steelcase projects. He had experience in environmentally friendly design principles.

He and Lott have authored on a book of “green design” guidelines for affordable housing.

“We’ve taken buildings that most people have written off, including this office,” Metz said of their firm’s 645 Cherry St. location. “Ted and I have this knack for finding things. We have an ability to see beyond face value. What we do is a reflection of what the client wants and the neighborhood dictates.”

They found a common purpose for revitalizing neighborhoods.

They do it efficiently — a staff of five employees, including three architects and an interior designer — while working in collaboration with local officials and neighborhood leaders to achieve the desired results.

Added Metz: “We are who we are. You either like us or you don’t.”

The future of the firm seems brighter than ever.

The list of projects Lott3Metz is planning is impressive proves there are lots of local businesses who like everything about them: Grand Rapids Brewing Co. is slated to open prior to Thanksgiving at the site of the historic Hawkins and Gunn Company buildings at 1 and 7 Ionia Ave. SW; Spectrum Health has hired them to build a clinic in the city, although public details haven’t been announced; a prominent local company has hired them to redo an office building in downtown; and there are a couple of other projects, Lott and Metz insist, that’ll definitely raise some eyebrows when details are made public later this fall.

It has 10-20 current projects in varying stages of development.

“The next year is going to be exciting for us,” Metz said.

Lott sees opportunities to make a difference in neighborhoods all around Grand Rapids.

“There’s still a ton of opportunities in this city and there will continue to be,” Lott said. “I feel like when the last piece of the Farmers Market is done, that’s going to be a special project, for a lot of reasons.

“The idea that we’re working on a place where 10,000 people are coming on a Saturday in a public space that really didn’t exist and in a manner that hasn’t really existed in Grand Rapids for a long time … to be able to make a space like that is a special opportunity,” he added. “I feel like, for me, it’s a project that’s deceptively simple in the way that it’s rendered. I think it’ll be a special urban space when it’s all built out. It’s something you’re going to be perceive a lot differently when standing in the finished plaza with the (Phase III) building in place that you can’t perceive from the rendering right now.”

Metz just smiles at the mention of the Fulton Street Farmers Market.

“There’s something I like in every project we’ve done,” he said. “As a whole project, I think the Farmers Market is the best.”

To learn more about Lott3Metz, visit their website: http://lott3metz.com

One thought on “Ted Lott and Greg Metz: Designing, Reusing and Making the Best of What We’ve Got.”