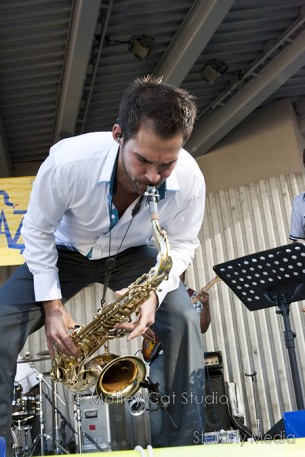 If true, then the dust has just been washed away from the lives of several thousand people in Grand Rapids.

Audrey Sundstrom, the Founder and Chair of the inaugural GRandJazzFest, shared this quote in the event’s program guide and based on her passion for jazz, there is definitely no dust in her life.

Sundstrom and her husband, Greg, frequently attend jazz festivals around the state. After repeatedly telling her husband she wanted a festival here in Grand Rapids, he finally told her, “If you want it here, you might just have to start it yourself.”

And if the success of Grand Rapids’ first-ever jazz festival is the deciding factor on whether or not there will be a second GRandJazzFest, you might want to block out the third Saturday of August 2013 now. 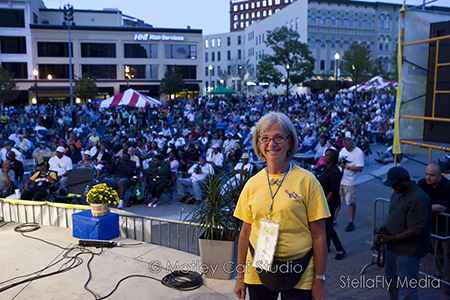 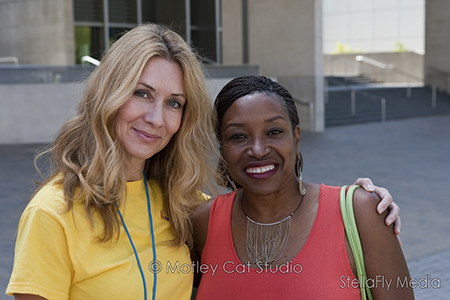 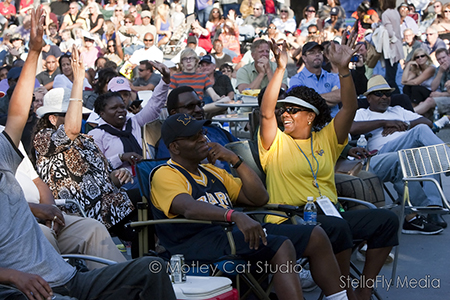 With an overwhelmingly positive response from a crowd of thousands, the six musical acts and everyone else involved, the event is considered a huge success.

As West Michigan Jazz Society Board Member John Miller put it, “This could be the start of something big.”

Sundstrom originally approached the West Michigan Jazz Society (WMJS) and asked for suggestions on local jazz musicians. They became the nonprofit fiduciary for the event, which helped GRandJazzFest get off the ground.

Early support by DTE, the presenting sponsor, and from the Downtown Development Authority kicked the event into further motion. Soon, Sundstrom started her own nonprofit, GR and Jazz, with friends and fellow jazz aficionados, Desiree Foster and Patti Flood, and then asked Molly Klimas of IntentPR to come on board to help with publicity for the event. Before the event, many more sponsors and friends got involved to ensure its success.

Sundstrom’s vision for GRandJazzFest was modeled after the River Raisin Jazz Festival in Monroe. She wanted to offer a variety of jazz genres such as big band, contemporary, traditional and Latin jazz and make it free so anyone could attend.

“I didn’t want to reinvent the wheel,” she said. 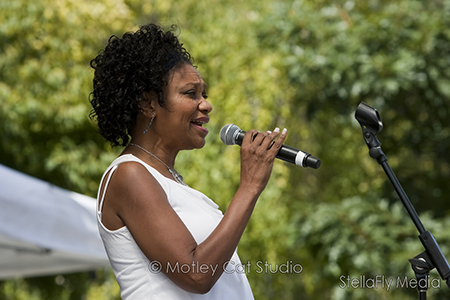 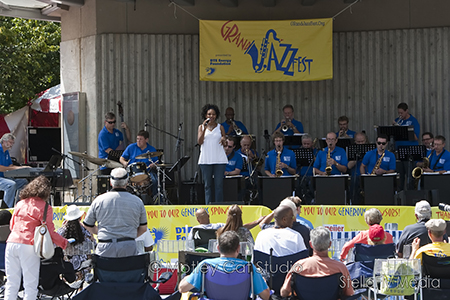 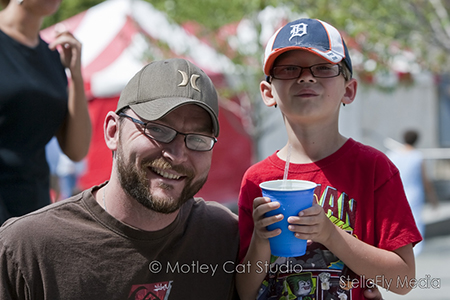 The August 18 event at Rosa Parks Circle began shortly after noon with one of West Michigan’s premier jazz ensembles, The Grand Rapids Jazz Orchestra, who has played traditional, swing and big band favorites for more than 35 years, including playing the first and third Sunday of each month at Founder’s Brewery. Dressed in matching blue shirts, the Orchestra kicked off the festival with upbeat big band music including a few sax solos.

Vocalist Edye Evans Hyde, the 2011 WMJS Musician of the Year, has been singing locally and around the world for more than 30 years. She joined the Grand Rapids Jazz Orchestra on stage and, in between songs, thanked the crowd for voting for her in the Sarah Vaughan International Jazz Vocal Competition. Evans Hyde entered the online contest a few days before the August 15 deadline at the encouragement of her son, Evan Hyde, who told her, “You can’t win if you don’t try.”

Her songs immediately went from the bottom of 800 or so entries to 14 th, 19th and 23rd place. Now that her version of What Is This Thing Called Love is in the top 15, Evans Hyde has a chance to compete live on October 21 and win up to $5,000. Based on the enthusiastic rounds of applause she received after each song, the people of Grand Rapids are rooting for her to win. 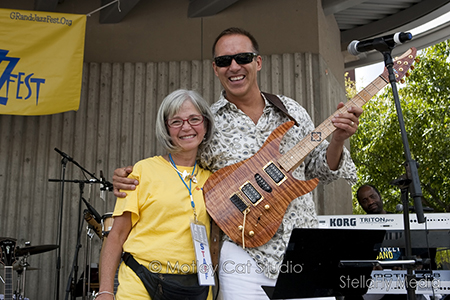 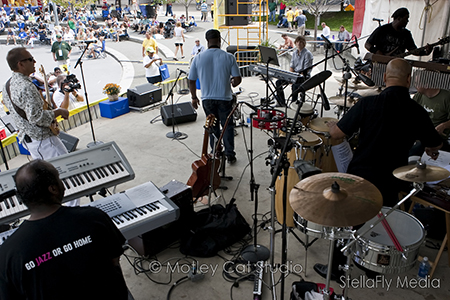 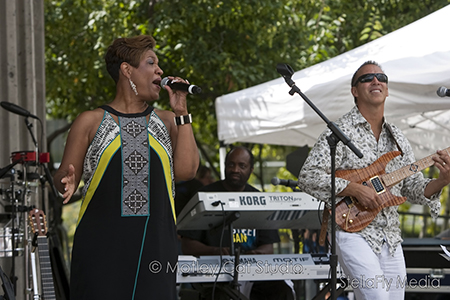 Next up, GRandJazzFest offered lively contemporary jazz performed by Walt Gutowski and the Bridge Street Band. Vocalist Michelle Covington accompanied the group and sang songs such as “Smooth Operator” and more.

Covington said Grand Rapids has been longing for something like GRandJazzFest and she believes it’s good for our community. The people at Rosa Parks Circle impressed her, too.

A friend of Covington’s, Monica Scott, agreed and added, “The crowd is diverse and reflective of the community. Jazz does that.”

And a diverse crowd, it was. People of all ages, races and socioeconomic status filled the open air space. Some brought chairs while others sat on the steps or bleachers. Many people brought picnic food, books and toys to entertain the kids. A couple people brought their dogs to enjoy the jazz.

Fred Bivins, a.k.a. “Mr. Festival”, his wife Gina, Jim Winslow, Lynn Mapes and Jane Muller sat on the shady outdoor patio of the Grand Rapids Art Museum during the concert.

“We’re talking about history and listening to jazz,” Bivins said.

Nearby, Grand Rapids resident and “big jazz fan” Steve Paulsen shared a table with his cousin Dave Corbitt and wife Heather who came all the way from Belleville, Illinois to attend the GRandJazzFest. 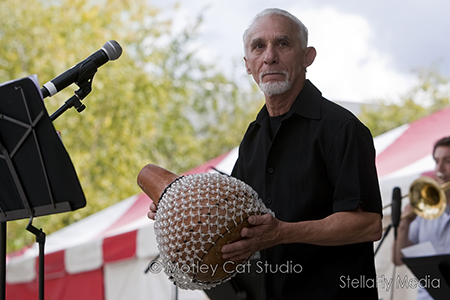 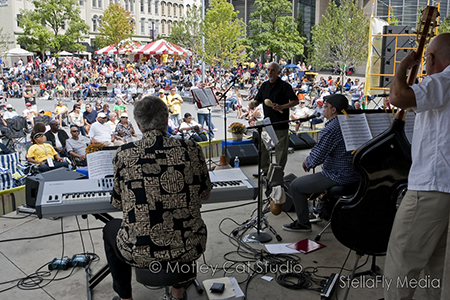 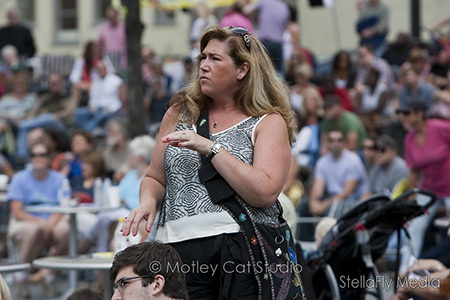 When Grupo Ayé took the stage next, the band energized the crowd with their dynamic Latin jazz and Afro-Cuban sounds. The music inspired many to dance in the middle of Rosa Parks Circle and show off sassy merengue and salsa moves. The rest of the guests couldn’t help but move to the rhythmic beat.

Grupo Ayé’s vibrant beat and Spanish vocals is not what most people think of when they think of jazz.

Terry Johnston, a local photographer who was there shooting for the Downtown Alliance, admits to having eclectic tastes but didn’t think he liked jazz until he attended GRandJazzFest and heard what he described as “inner city funky jazz.”

Another new fan of jazz is a pink-haired, 19-year-old girl named Alix Grabow. Hanging out behind the stage, she said her father played the piano so she especially liked the keyboard solos.

“This is fun,” she said. “We always hang out downtown but we’ve never heard jazz here before. Some of it you can even dance to.” 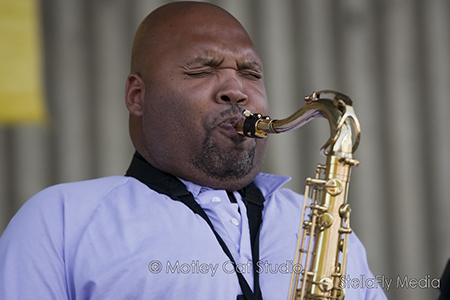 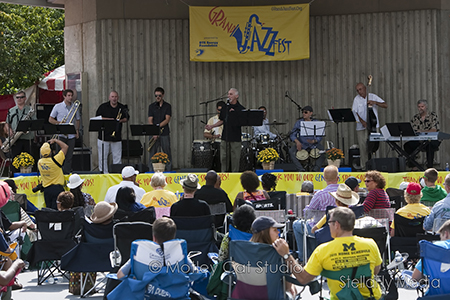 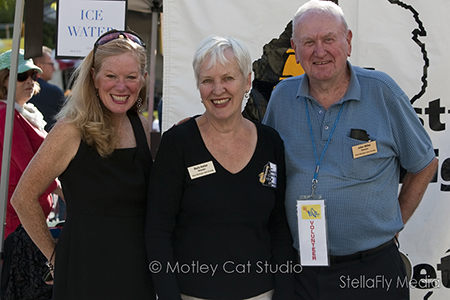 Next on the GRandJazzFest stage was The Steve Hilger Jazz Quintet featuring many standard jazz songs with instrument solos throughout the set. That appealed to local photographer Chris Wilson who liked how everyone in the band got to show off his talent for a bit.

“Any time you can hear Lee Morgan’s ‘The Sidewinder’ it’s got to be good.”

Steve Talaga not only played the keyboards for The Steve Hilger Jazz Quintet, but also for The Grand Rapids Jazz Orchestra and Grupo Ayé during GRandJazzFest. This former WMJS Musician of the Year thought the event was “incredible.”

Randy Marsh, who played a few spirited harmonica solos during the set and the drums, organizes the Sunday night Jazz Jam at Hopcat each week, where experienced jazz musicians join in and perform a song or two with the rest of the group.

“People don’t realize the great talent that’s here,” he said. “These guys have played all over the country and the world.”

Tadlock’s friend, Elsa Fierens, grew up in Denmark and says she first became a jazz fan because her cousin, Erik Moseholm, is a well-known jazz musician there. She, too, hung around and enjoyed GRandJazzFest for most of the day because, as she says, “Music and people really make my life worth living.” 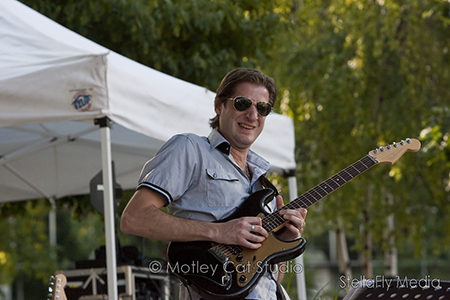 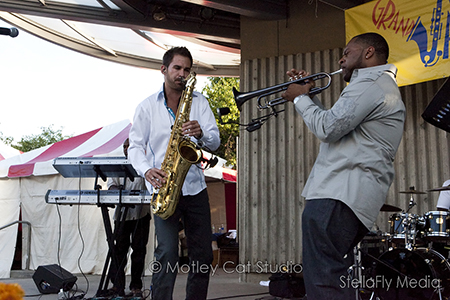 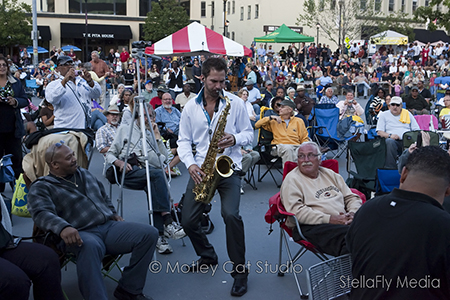 Lansing residents Henderson and Gwen Bodiford and Robert Hurd and Diane McMillan are what you might call Phil Denny groupies. These two couples have followed him around the state to hear him perform. The women in the group have been listening to him since he was in the band at Everett High School where they both worked as assistant principals.

McMillan said the former homecoming king was “a very good student and very sweet and polite.”

The couples, who attend many other jazz festivals, came for the whole day and were impressed with GRandJazzFest.

“This is a quality line up from top to bottom,” said Hurd.

Saturday was the first time Phil Denny ever played in Grand Rapids and he was so taken by the response he received, he left the stage and played his saxophone in the middle of the audience for a bit. That roused the crowd even more, especially the women who were already gushing over the handsome musician.

Backstage, Denny applauded Sundstrom for her efforts with GRandJazzFest.

“It’s a great idea that came to fruition,” he said. “She has great passion and selected a good diversity of music for the first show.”

Throughout the day, Sundstrom walked around in her bright yellow GRandJazzFest t-shirt sporting an infectious smile on her face.

“What’s not to be happy about?” Sundstrom said at one point. “It’s a beautiful day, people are here and the music is good.”

Three other women were also smiling all afternoon. Sisters Mickey Parker, Ann Powell and Carol Allen, who were brought up on jazz, set up their chairs in a shady spot on the grass in the early afternoon. They didn’t plan on spending the rest of the day at GRandJazzFest, but they were still in the same location during the last set––laughing, grooving and having a very good time.

“This is such a release on life; a way to get away from stress,” said Powell. 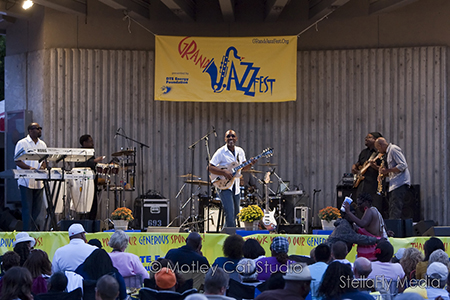 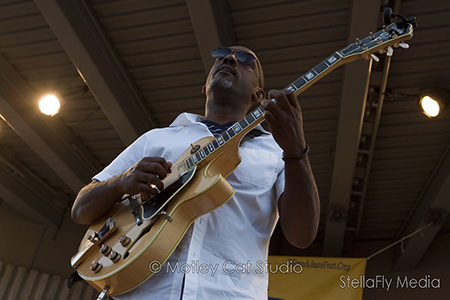 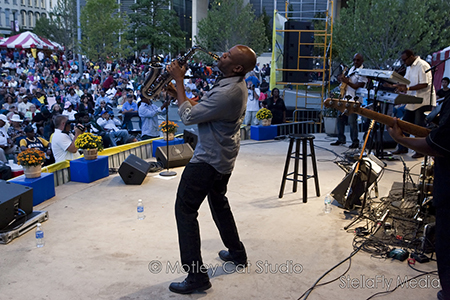 GRandJazzFest headliner and guitarist Tim Bowman closed out the night with a stunning and memorable performance, just as one would expect from an internationally acclaimed performer.

His hour and 15 minute set included his two number one singles “Summer Groove” and “Sweet Sundays” and the receptive, energized crowd rewarded him with loud cheering.

Bowman described his music as “groove and melodies” and then with a wink and a dazzling smile, he added, “and fun.”

This contemporary jazz guitarist has produced six CDs and was named as Billboard’s 2009 Top 10 Smooth Jazz Artist of the Year. He also received the Best Guitarist of 2010 award at the International Jazz Festival in Dubai.

Even though Bowman only lives a few hours away in Detroit, he hasn’t been to Grand Rapids in 20 years and acted surprised by the size of city and the audience.

GRandJazzFest ended on a high note with a completely packed Rosa Parks Circle. The crowd energy throughout the day was positive, but especially during the last few hours, when nearly everyone was smiling, dancing and getting into the groove.

WMJS board member Darryl Hofstra summed up the end of the inaugural GRandJazzFest the best by saying, “The night is cool, but the jazz is hot.” 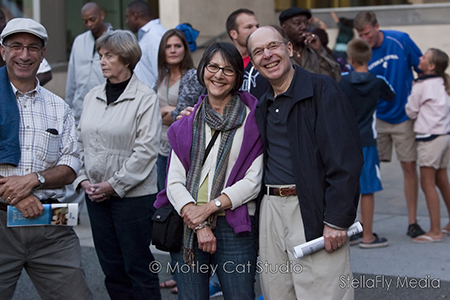 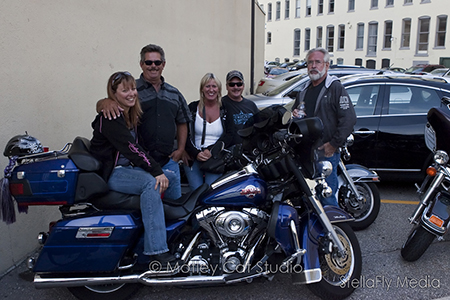 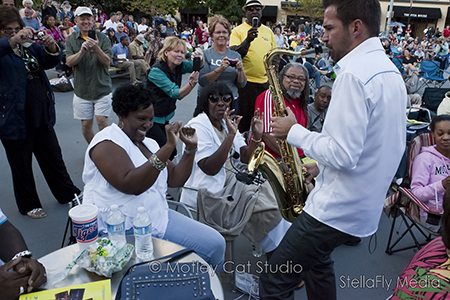 Sundstrom was still smiling the next morning and thrilled with the festival’s results.

“It turned out to be everything I had hoped for,” she said. “I am grateful to all of the sponsors, the staff, the volunteers, the musicians and everyone who came out.”

Sundstrom had the vision for GRandJazzFest, but insists, “The event wouldn’t have been what it was without everyone’s help and so many people deserve a lot of credit.”

Thank you Audrey Sundstrom and your talented team for bringing GRandJazzFest to Grand Rapids. Please “wash away our dust” again next year.