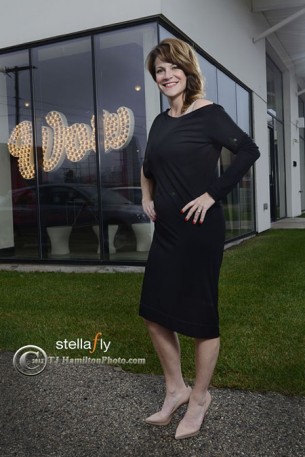 Wendy Wassink works in a building with a huge sparkly sign out front that reads “WOW.”

She lives on Red Bull and once wore a giant papier-mache cardinal head. She uses the phrase “out the wazoo” in her professional bio. She’s wearing bright yellow pointy-toed high heels (outrageous shoes are her thing) that add three inches to her height and walks effortlessly in them, despite a recent knee injury that had her sprawled face down on her son’s soccer field.

The moms were invited to join the game. Naturally, she was in. Wet grass is slippery.

Wassink is the cofounder of Kantorwassink, a Grand Rapids advertising agency with a list of heavy-hitting clients and international awards, well, out the wazoo.

She and longtime best friend and ad partner Dave Kantor started the business six years ago after successful and stressful careers in the top ad firms up and down Chicago’s Michigan Avenue. 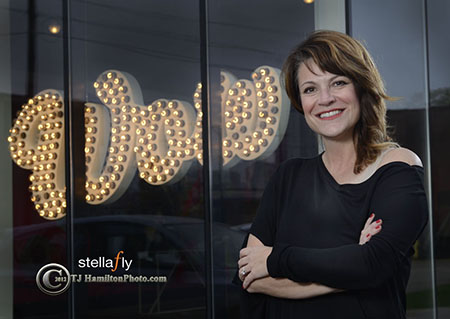 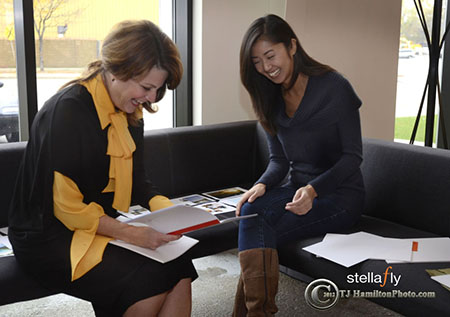 She was behind such memorable campaigns as Did Somebody Say McDonald’s?, Never Miss a Genuine Opportunity for Miller Genuine Draft and the breakthrough campaign that reinvigorated Cadillac, launched the Cadillac Escalade into rap-video superstardom and left Wassink, as she likes to say, “incredibly sick and tired of Led Zeppelin.”

Effervescent and witty, Wassink has been creative since she was a kid growing up in Des Moines.

Her dad was an electrical engineer who loved to tinker. Her mom was a stay at home super mom who led everything from the PTA to Girl Scouts.

Dad was always welding something. Mom was a craft queen. Wendy soaked it all in.

As a kid she played on a softball team called the Cardinals. When they entered a float in a hometown parade, Wendy’s mom crafted 13 red papier-mache cardinal heads for the girls to wear.

“It was quite a spectacle,” Wassink recalls with a grin.

In third grade she entered a coloring contest sponsored by Peter Pan peanut butter. Grand Prize was a family trip to Disney World.

Young Wendy went for the wow. She made copies of the page then set to work embellishing her entries with bits of tissue paper and foam. She entered five times.

“When they called my parents to tell them I won, they said I would have won first, second, third, fourth and fifth place,” she says with a laugh.

While other fourth graders saw ads and wanted stuff, Wendy was fascinated by the logos. She loved to write. She went on to major in journalism at the University of Iowa.

“Advertising is a funny thing,” she muses, at her glossy red conference table. “Everybody watches ads, they like a good one, but everybody thinks, ‘I can do that.’

“It’s not just about having a wacky idea,” she says. “It has to be a creative idea that moves people to do something.

“People hear our name and say, ‘Oh, that’s the crazy creative shop,’” she says. She smiles. “They don’t realize how deviously deep our work is.”

They did the ad campaign for Ferris State University — simple black lettered statements on a bright yellow background.

“Our graduation gowns come with the sleeves rolled up,” one Ferris billboard boasts. “Where are you going?” asks the side of a Ferris-festooned city bus.

“Those ads are deceptively simple, but they’ve been wickedly effective,” Wassink says. “Enrollment is way up. It’s broken through the clutter. It’s strong, it’s vibrant, it’s bold. It’s about what the university is doing for you.

“What moves us the most is if it’s really, really smart,” she says. “We can make anything look good or sound funny. These ads are changing peoples’ perception of what Ferris is.”

“We think way too much and way too deeply about every single word,” she says. “We use our street smarts, our intelligence and our guts.”

She and Dave were high fliers in Chicago. But it was wearing on them.

“I’m wildly, insanely passionate about what I do,” Wassink says. “I’m kind of weirdly obsessed by it.

“But the corporate politics…” She sighs. “It lost its luster for me. I no longer had the passion for doing what I loved.”

She had been living in Grand Rapids for 14 years with her husband, Mark, an attorney. She commuted to Chicago. She and Dave had clients in Detroit.

“We needed to get closer to rolling up our sleeves and getting creative again,” she says.

So they had this crazy idea. They’d open up their own shop in Grand Rapids. Big city talent at Midwest prices. 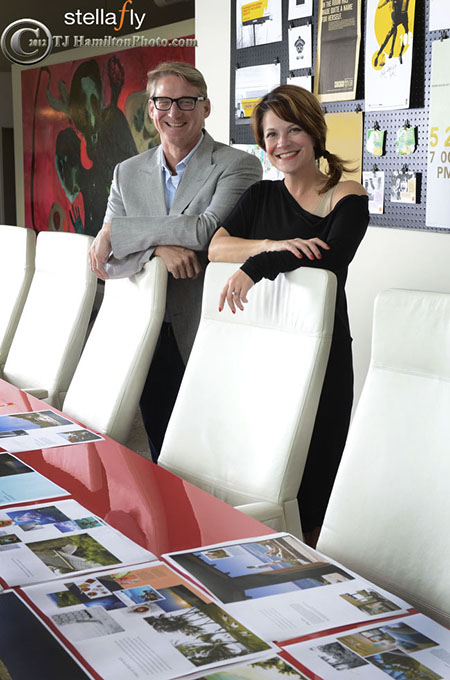 Kantorwassink was named one of the 2011 “Michigan 50 Companies to Watch” by the Edward Lowe Foundation and listed on Inc. Magazine’s “5000 Fastest Growing Companies” last year.

“I have the passion back,” Wassink says happily. “I no longer get to fly first class to Europe to do glamorous shoots, but I love it again.”

What inspires all this creativity? Nacho cheese Doritos? Yoga?

At the mention of yoga, Wassink laughs her head off.

“The hardest thing is turning it off,” she says. “I’m inspired by everything. I have ideas about everything.” 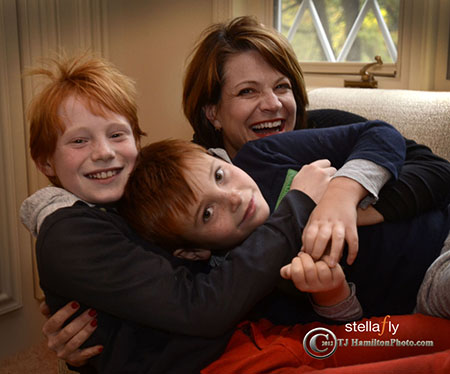 Wassink works a lot. Lately, she’s been putting in 80-hour weeks. But she knows how to play.

She and Mark have two sons, Henry, 10, and Theo, 7. They all love sports events and travel and eating. They have a small studio condo in Chicago and love exploring the city.

“My kids can hail cabs and eat sushi,” she says.

Henry inherited his mom’s creativity, recently winning his school’s version of ArtPrize by creating a “psycho snow boarding bunny” out of recycled materials. (Much of it was made out of empty Red Bull cans.)

Wassink helped him hot glue it all together.

Theo, born with some developmental delays, recently made a 10-foot paper alligator with mom’s crafty help.

Theo has changed her, Wassink says.

“He wakes up with a smile on his face every day,” she says. “I have to show you a picture.”

She leaps up and clickety clacks away in her bright yellow high heels, returning with a photo of the brown-eyed cutie.

“For the first year of his life, I was scared,” she says, gazing at his photo. “I was used to solving problems, taking control of situations. This wasn’t anything I could control.

“I learned a lot about myself,” she says. “I learned what’s important. Theo is slow to do things and that’s so good for me.” She smiles. “It’s the opposite of me.

“I’ve never been one to sweat the small stuff anyway,” Wassink says, “but it’s a good reminder. He helps me see what’s great in life, because he loves everything. He’s here to help me pace myself a little, to delight in things.”

She delights in her work.

Being a good role model feeds her, too, she says.

“I have a lot of young women working for me,” Wassink says. “I like showing them that women can be successful and speak their mind and be fun without giving up their femininity.”

“We have the power to help companies be better,” she says. “The stronger we can make Ferris, the stronger West Michigan is. There’s power in that.”

She strolls past examples tacked to the walls of campaigns for children’s hospitals and arts organizations.

“What can we do to help them?” she asks. “There’s powerful good in what we do.”