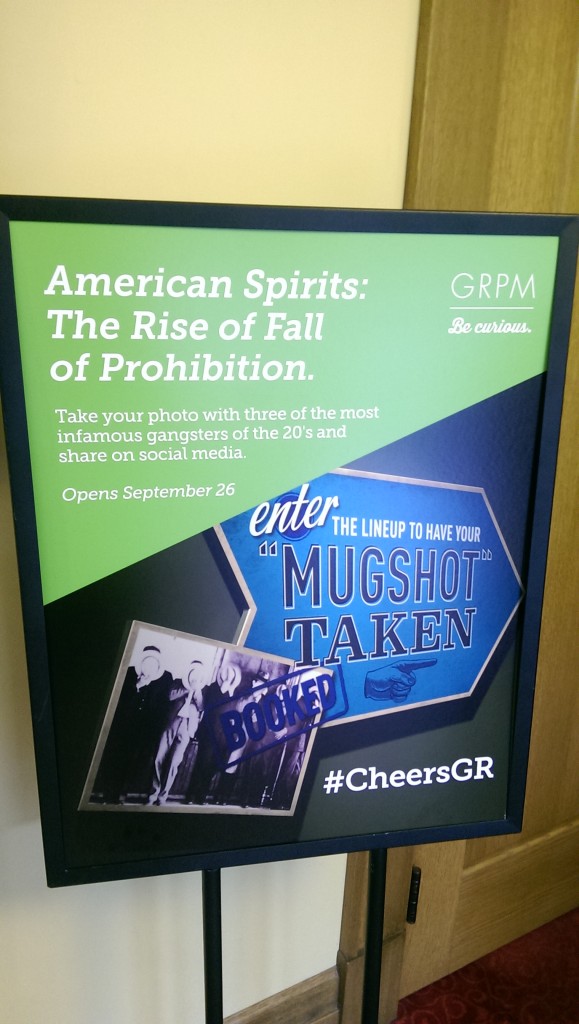 Director Bruce Tinker said it best when he remarked that “’Civic’ is our middle name so being part of the community is very important to the Grand Rapids Civic Theater (“#GRCT”)”.  While the #GRCT is kicking off its 90th season, there is nothing antiquated about how they seek to synergize with other downtown Grand Rapids businesses.  The #GRCT is finding new ways to deepen community partnership and uses art as a reflection of life to address issues that are relevant to us today.  Leading off the #GRCT 90th season is a supercharged classic – The Great Gatsby!

Act One – The Great Gatsby:

This adaptation of The Great Gatsby (“#GRCTGatsby”) was specifically chosen to start the #GRCT’s 90th season because it is a “September Story” that combines the fleeting feeling of a summer flying by and the bittersweet feeling of summer coming to an end. Director Bruce Tinker (“Tinker”) explained that the story follows the summer arc and shows how the Roaring 20’s were a time of turmoil contrasted by extravagant decadence. Daisy observes that she always waits for the longest day of the year and then somehow misses it! #GRCTGatsby is truly “breakneck speed,” running only 82 minutes. This version is also the only stage adaptation of F. Scott Fitzgerald’s classic novel authorized by the Fitzgerald Estate.  Although there were others, including a movie some may have seen, Simon Levy’s script reads true to the book in a way that has the dialogue coming right off the pages.

#GRCTGatsby is a favorite story among many, there is a reason it is a classic – the costumes, the music, the story . . . what’s not to love about extravagance, scandal, and wild parties?  When speaking with the actors prior to opening night, we were excited to hear that many of the actors involved auditioned for this play because they loved the story so much. Brain Peerbolt, the actor play Jay Gatsby, hopes that the lines from the page will echo in the minds of the audience, much like they did for him when he first read the novel. 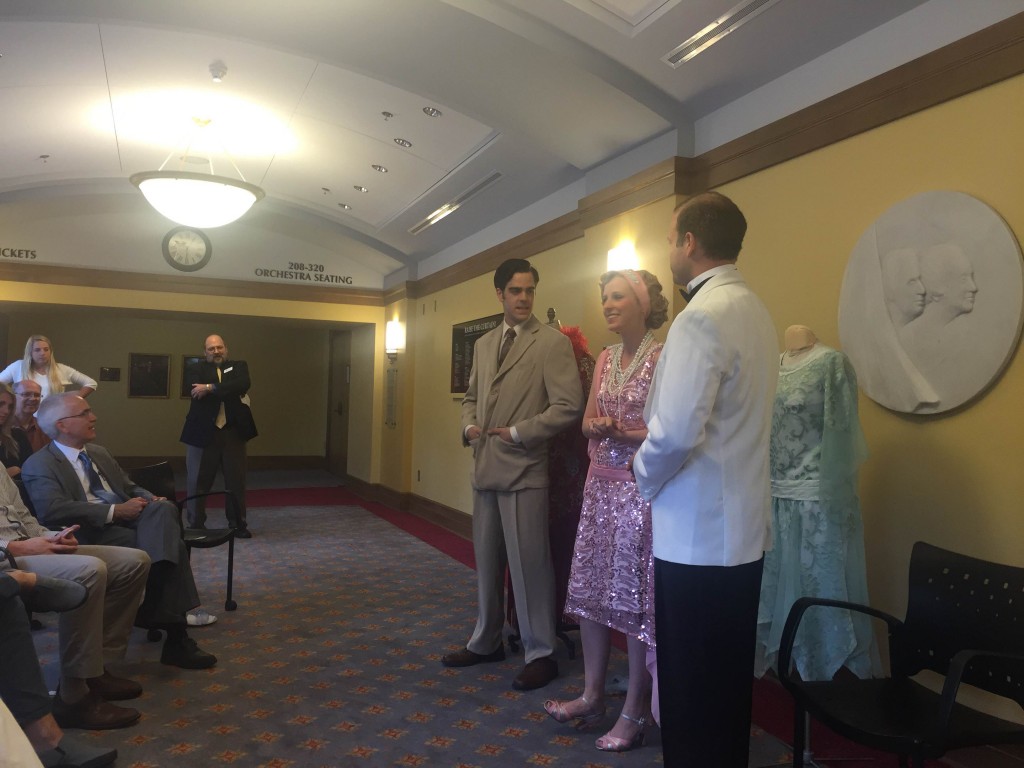 Two of the ten actors involved are new to the #GRCT, so there is some new blood in with the seasoned veterans.  We had the privilege to talk with three of the main actors – Nick (David Cobb), Daisy (Audrey Filson), and Gatsby (Brian Peerbolt) – prior to the opening night (September 11, 2015).  They all enjoyed taking on the characters but shared that they met challenges along that they used to give their characters depth . . . each character struggles with a different sort of moral ambiguity, so the “bad guy” is not easily discernable as you learn more about their motivations and see them try to live their lives.  Filson and Peerbolt have become such a part of their characters that they’ve begun seeing some of their characters’ traits extending into their everyday lives.  Filson observed that she is much more animated, and Peerbolt has adopted the “Gatsby ‘Yes’” as part of his common tongue!

After visiting with some of the actors we were invited to take a look at the stage and the set designs that were out . . . just when we thought we couldn’t get any more excited, one look at the #GRCTGatsby stage left us giddy to see it live.  The crown jewel is a replica of a 1920s era Mercedes that they found online – and get this, it works… and you can buy it after the #GRCTGatsby run!  There are three other major location sets, and three secondary sets; he commented that there are pieces and fragments of the scenery, much like the lives of the characters are fragmented. Tinker went on to say that because of how many scene changes there are the play is more like a musical than your run of the mill production. 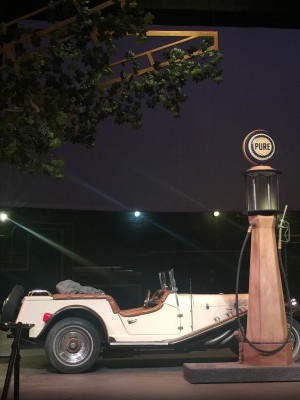 When you think about “Community Theater” and “volunteers” most of us think first about the actors, as hundreds of hours of their time provide the community with a fantastic evening of entertainment.  However, did you know that nearly EVERYTHING related to a show at the #GRCT is made possible through volunteer hours?  There are volunteers to help with building the stage scenery, the props, costumes etc. It truly takes a village to make it all possible!

One of the most beautiful examples I saw of this was in the creation of the costumes for all of the actors.  The amazing Costumer, Bob Fowle, had no small task before him making costumes for all of the actors; Daisy alone has seven costumes!  Now I just want to take a moment to let that sink in… that’s a costume change almost every 10 minutes.  If you know anything about women’s clothing in the 1920s, you know that flapper dresses were covered in beads and sequins; Bob has around TWENTY regular volunteers he calls on to help him make sure the actor’s look perfect on stage . . . including sewing on all of those beads and sequins! 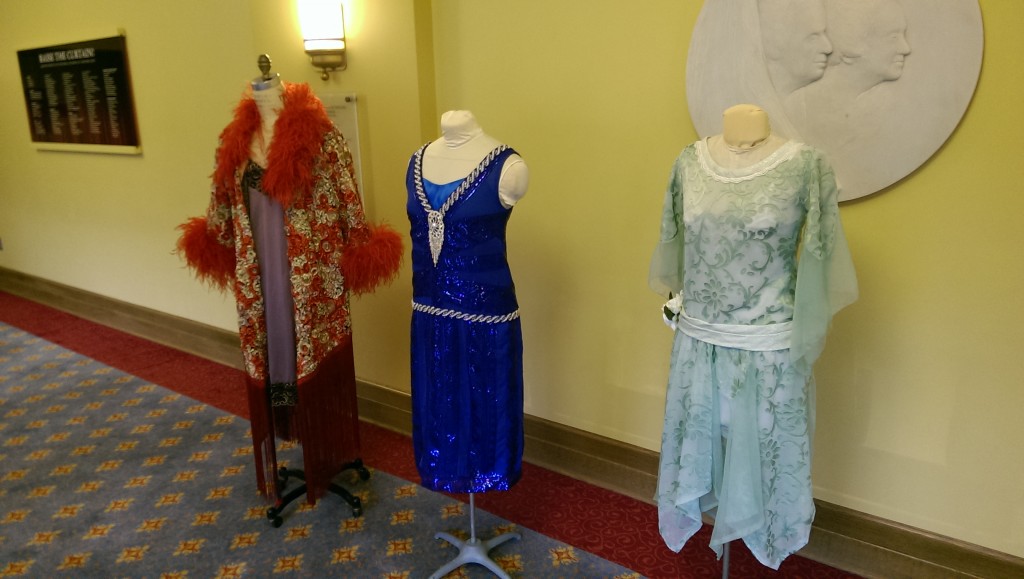 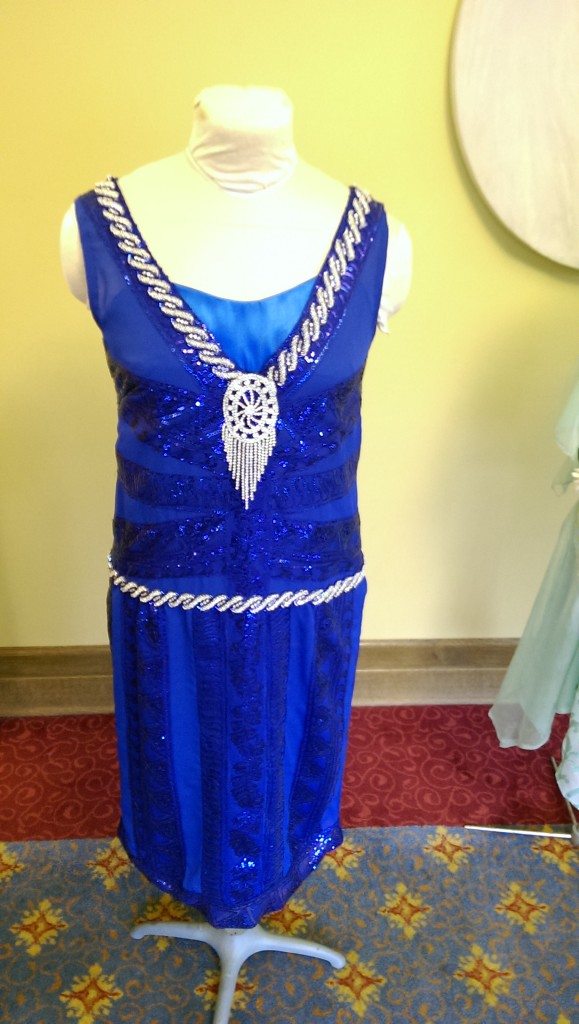 Tis the season for anniversaries, and the Mental Health Foundation (“MHF”) is celebrating its 25th year simultaneously with #GRCT 90th season.  The MHF is working in conjunction with the #GRCT to promote the theater and raise awareness of mental illness in everyday life.  The Great Gatsby has undertones of mental illness throughout; the MHF is going to use this play to teach through its trademarked “be nice” (Notice Invite Challenge Empower) curriculum geared at teaching bully and suicide prevention programs.

While you’re in the 1920’s mood, you can follow up your visit to the #GRCT with a swing through the Grand Rapids Public Museum (GRPM).  What can be more exciting than gangsters and the roaring ‘20s?!  Starting September 26th, the GRPM will have a prohibition themed exhibit, which came to them through the National Constitution Center.  The exhibit uses the prohibition era to demonstrate how an amendment is made to our constitution . . . if you know anything about history, you know that trying to prohibit alcohol in the country did not go over well!  The GRPM will have volunteers in 1920s costume interacting with theater attendees at the #GRCT before certain shows; the GRPM is also doing a social media campaign and giving away free tickets – so be sure to LIKE them on Facebook, for a chance to win: facebook.com/GRMuseum.

With the 2015/2016 #GRCT season line-up this community is in for months of excitement!  What I think is more impressive, however, is how our Grand Rapids community (and those surrounding) get the benefit of having an organization as specials as the #GRCT, impacting each of our lives in ways we likely do not even notice.  I strongly urge each reader to check out the line-up at www.grct.org and treat your family, your friends, and yourself to a show, and become a part of this exceptional community!