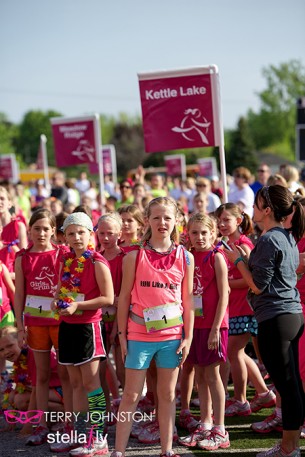 At 9:30 a.m. on Saturday, May 19, the stadium at East Kentwood High School was filled with over 2000+ strong, confident elementary school girls ready to give new meaning to the phrase “girl power.” The girls, along with family, friends and community members, arrived together, in teams, in a 5 K (3.1 mile) celebration run to mark the completion of their involvement in the 10-week Kent County Girls on the Run program.

Prior to the event, Molly Barker, Girls on the Run‘s founder, spoke to two local elementary Kent County Schools. Barker started Girls on the Run in 1996 to help girls untangle from the negativity that squishes their spirits during middle school. She left her career as a counselor to do it, making ends meet by catering at night. Her passion for the cause was fierce. Barker started the program in Charlotte, N.C. with 13 girls. Today, it’s grown to 160,000 girls in more than 200 cities. (Read more)

The most important day for every GOTR girl is the Season Finale 5k – this is an event where they can celebrate all their hard work and training! Because this is such a special day for so many, the entire community is invited to participate. The goal of the season finale 5K is for the girls to do their best while having fun! The girls are not encouraged to race competitively, but rather to reach their own individual goals. For most girls, that means making it to the finish-line – whether by walking, running or skipping.

Girls on the Run is a national nonprofit program that combines training for a 5K (3.1 mile) run/walk with a series of engaging, fun lessons that inspire girls to make a difference in their own lives and in the lives of others. The non-competitive 5K celebration run is a capstone event that helps participants realize the power they have to achieve their goals. 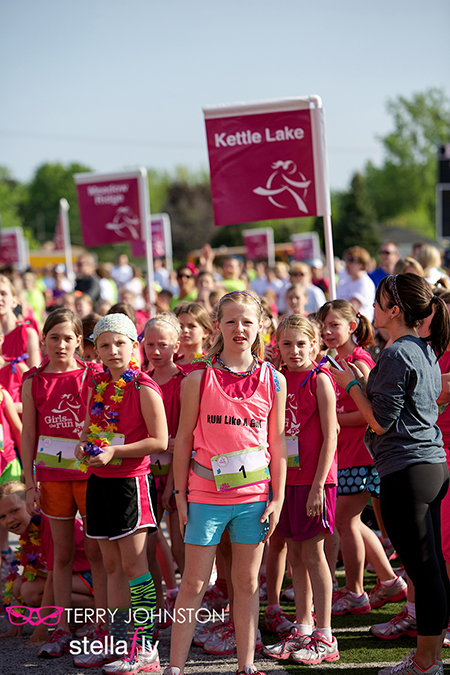 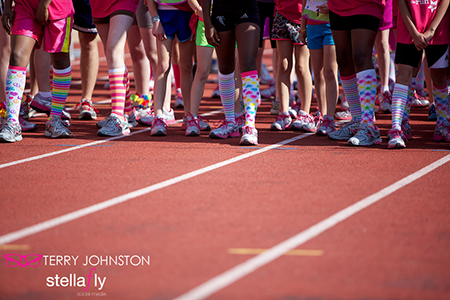 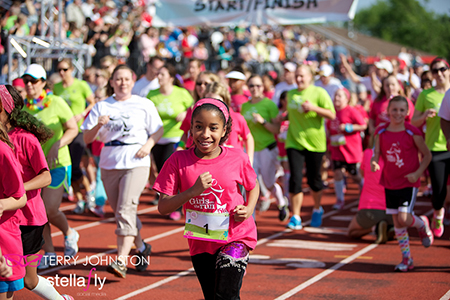 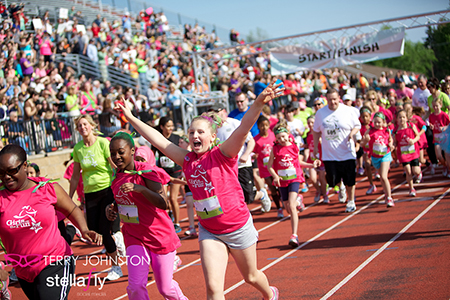 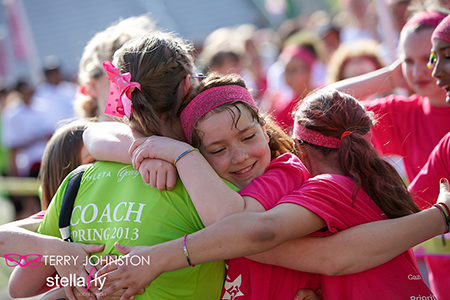 The Kent County Girls on the Run is now in its ninth year. Kicking off the 2013 season, KCGOTR welcomed 8 new sites to their Council family, making a total of 68 sites in schools throughout Kent County. 2055 girls participating on over 130 teams. This is all done through the efforts of over 270+ volunteer team liaisons and coaches. The teams, comprised of girls in the third through fifth grade, meet twice a week after school and follow a 10-week curriculum that mixes running workouts with games and group discussions on topics ranging from emotions and gratitude to gossip, bullying, drugs and nutrition.

A key part of the program is involvement in community service. Each team selects a project in which to participate in as a way of experiencing what it means to help others. The program culminates with the non-competitive 5K celebration run, a capstone event that helps participants realize the power they have to achieve their goals.

A similar program, Girls on Track, is offered in the fall for girls in grades six through eight.

The program is funded by program fees, offered on a sliding scale, donations, sponsorships and grants. A number of fundraising events are held throughout the year to raise funds to support the nonprofit program. 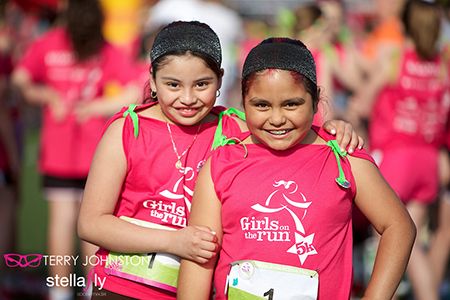 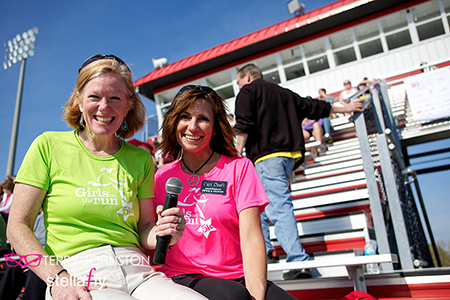 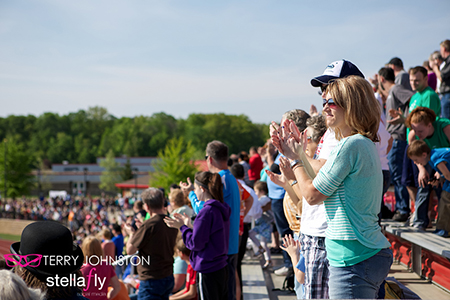 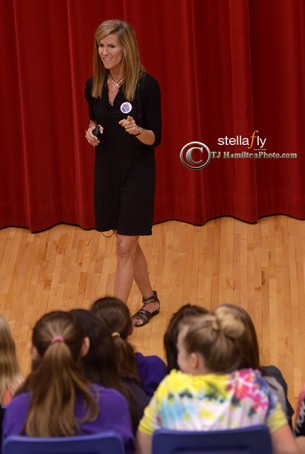 When Molly Barker was in grade school, she was so skinny that she wore thick high socks to school every day, to hide the twiggy legs that embarrassed her.

One day a group of mean girls pushed her down, stripped off her shoes and her comfort zone socks and ran off with them, leaving a crushed and humiliated Molly on the ground.

Later, she would realize her skinny body was lean and athletic, and that she could run like the wind. Running helped Molly through a lot — her mother’s alcoholism, and later her own.

She would go on to compete several times in the Iron Man Triathlon — a 2.4-mile rough-water swim, 112-mile bike race and 26.2-mile marathon.

But girls nationwide know Barker as the founder of Girls on the Run International, their beloved after-school program that teaches them to soar.

So there was lots of excitement in Caledonia last week when Barker, 52, journeyed from her home in North Carolina to talk to middle school girls there.

“There’s something about her presence and her genuineness,” says Lori Burgess, director of Kent County Girls on the Run. “With Molly, Girls On the Run becomes more than a program. It’s this thing that touches girls’ hearts and souls.”

It all culminates in a celebratory 5-K run/walk, which happened Saturday morning at East Kentwood High School. No clocks. No medals for first place. 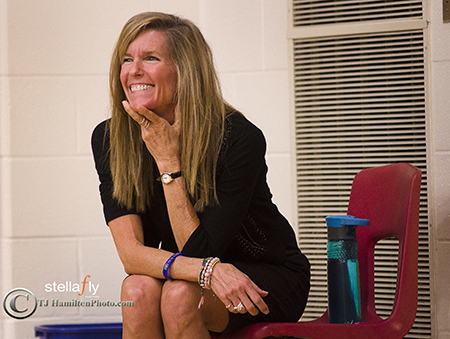 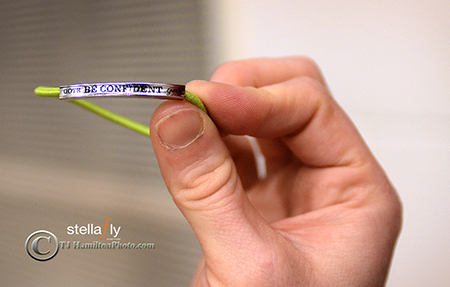 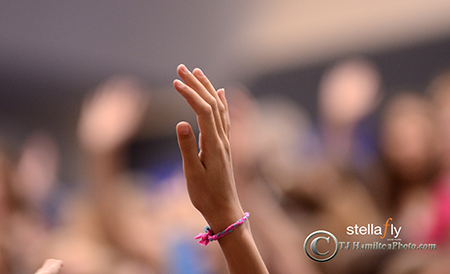 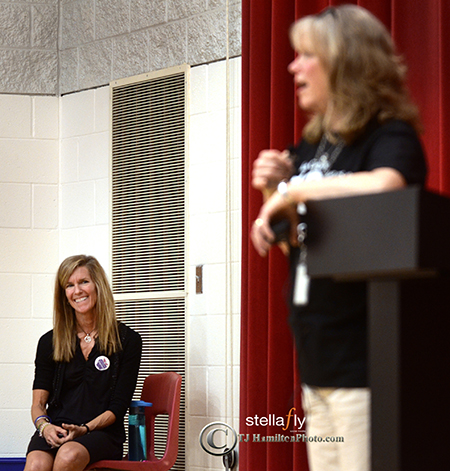 “It’s not about speed,” Burgess notes. “It’s about moving forward.”

More than 2,000 Kent County girls spent this spring hearing messages that made them feel meaningful and strong. When you hear them from the dynamic Barker herself, they’re almost magical.

She started Girls on the Run in 1996 to help girls untangle from the negativity that squishes their spirits during middle school. She left her career as a counselor to do it, making ends meet by catering at night. Her passion for the cause was fierce. She had a toddler daughter at the time, Helen, now 14.

“Back then I thought if those 13 girls change themselves, my work is done,” Barker says in an interview after the assembly. “I didn’t expect it to become a movement.”

It sprang from her own soul.

Running has been solace and sustenance for Barker ever since 6th grade.

She was the new kid that year, starting at a private school where all the other kids had known each other since first grade. She was a tomboy.

Then the P.E. teacher, Miss Miller, announced they would all run a mile.

“I was stoked,” she says with her wide smile. “I wouldn’t be Molly, the Invisible Girl anymore, or Molly the Weird Girl. I would be Molly, the Runner Girl.”

Miss Miller yelled “Go!” and Molly flew. She was invincible. Until her foot hit a hole in the track and she tumbled to the ground, spraining her ankle.

Suddenly, she felt like Molly, the Failure Girl. The negative voices in her head were tough to shake. 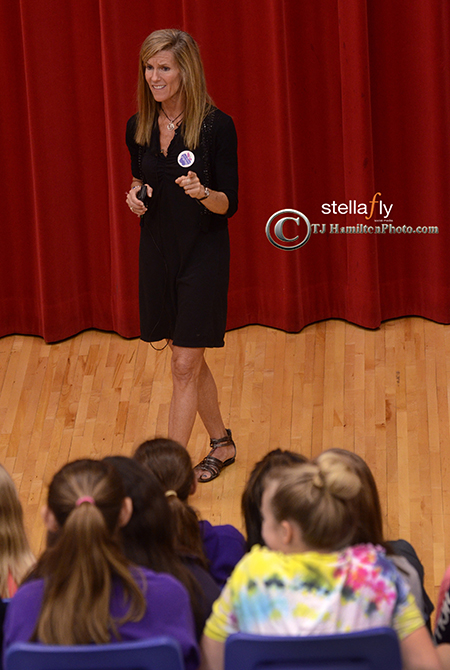 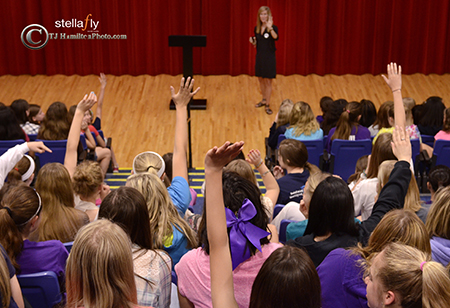 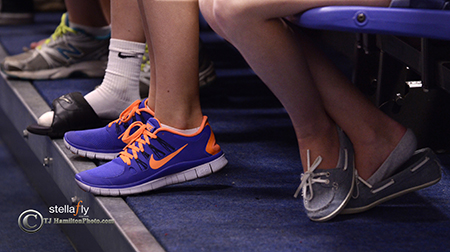 By age 15 Molly was drinking and she became addicted to alcohol. She was a contradiction: A top student, she was the first girl elected president of the student body. Successful, in control. Except she didn’t think so.

Her mom struggled with alcoholism, too, and at age 50 started running — part of her mission to recover. She ran every day before sunrise in a skirt and with a tall, Southern belle hairdo.

“She ran in the morning,” Barker says, “so the neighbors wouldn’t see.”

Her mom overcame her addiction and started working at a rehab center to help others do the same. At age fourteen, Molly joined her mom’s daily runs.

During those runs, Barker says, “all those negative voices went away. Poof.”

The girls in her audience are quiet as a dead cell phone. Barker smiles at them.

“My role is to help you find that space where you don’t hear those voices, either,” she tells them. “For me, it was running. It might be running for you, or it might be art or music or dance. Find that place where you can say, ‘You know what? I’m awesome. I’m not perfect, but I’m awesome.’ 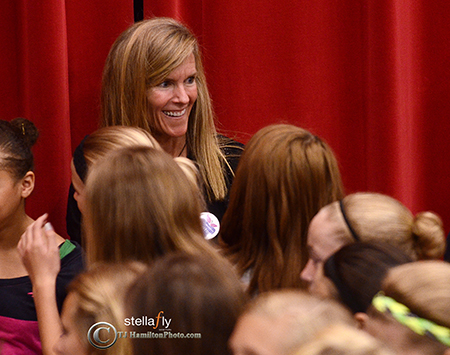 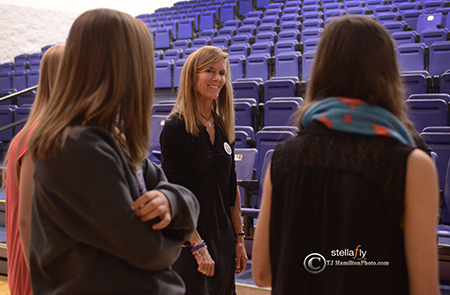 “What can you do at this school,” she asks, “to open up a space where every girl can be herself?”

After the thunderous applause, the girls file out in their ponytails and flip-flops. They each get a bracelet to wear that says “Be confident.”

After the girls go back to class, Barker tells how a fan recently told her she’s a “Joy Model” — joyful all the time.

She shakes her head.

“Don’t call me that,” she says. “Sometimes I cry. I’m sad. I have bouts of anxiety. I question my parenting. That’s all human.”

When she speaks to girls, tells them they’re awesome, urges them to be themselves, “It’s a constant reminder,” she says, “of the things I need to hear.”

Like her mother, Barker got sober, then worked as a substance abuse prevention specialist. Today, she travels the country bolstering girls. Things get better, she can assure a floundering girl.

What does Barker want for these girls as they grow into women?

“You might think I want them to keep running,” Barker says. “And I do hope they continue to do something active, for their health.

“But deep down, I want them to discover that one of the world’s greatest needs meets their great joy. That’s what happened for me. There was this huge need in the world to help girls. And it matched up with my great joy.”