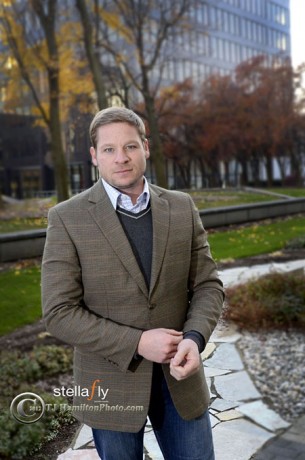 When Kristopher Larson was a kid growing up in the suburbs of Raleigh, N.C., he loved going to his best friend Andrew’s house downtown.

Sure, in the suburbs there was a stream to explore and his mom and dad let him stay out and play all day.

But downtown, he says, “There were 50 different ways I could spend my allowance. We could walk to the comic book store, or buy an icee or get a hot donut at Krispy Kreme.” 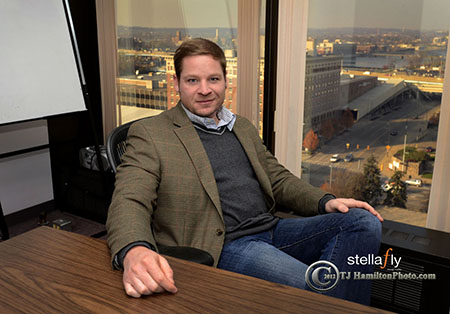 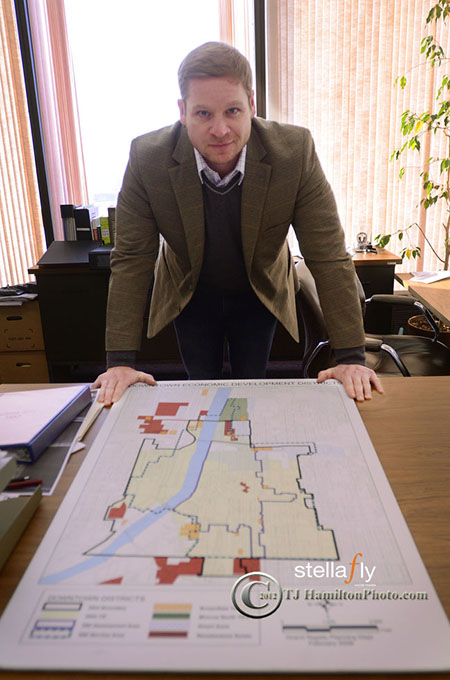 That was a defining experience for Larson, the new executive director of the Grand Rapids Downtown Development Authority.

The kid who loved downtown grew up to be a guy who loves downtown. He wants everybody to feel the same thrill about the city as he does.

Larson, 34, took on the job three months ago, taking over for Jay Fowler, who announced his retirement last fall after nine years at the helm of the DDA.

He knows a lot of people have no idea what the Downtown Development Authority is. But most everybody has seen the results of its work.

The development agency is responsible for a host of improvements in the downtown area. Using incremental property taxes collected from downtown properties, the DDA has invested about $120 million in cool projects since 1980.

That’s leveraged more than $2 billion in private and institutional investment in the downtown area.

When Larson interviewed for the post with the DDA board and Grand Rapids city commissioners last spring, he was up against a more seasoned candidate with more leadership experience.

But Larson won the board over with his passion and enthusiasm. He exudes confidence. His gaze can be unnervingly direct.

He’s the kind of guy who would work until midnight every night if his girlfriend let him. He wins “Employee of the Year” awards. He worked on an archeological dig in Jordan and learned conversational Arabic. He studied Shakespeare at Oxford University.

He likes job titles with the word “downtown.” 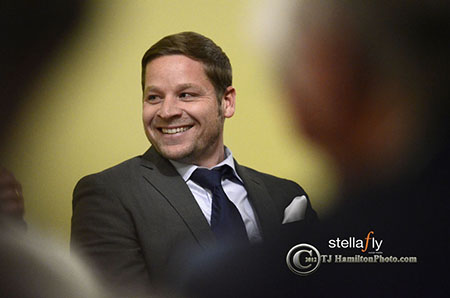 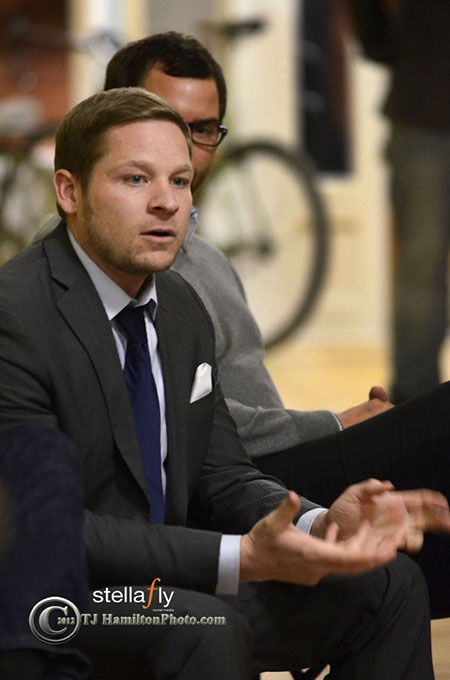 Earlier this month, Larson was one of four panelists on a Rapid Growth-sponsored speaker series about “placemaking” — creating a vision for a place based on the desires of the people who live and work there.

(An aside about beer: Beer-lover Larson has a good-natured rivalry between his brothers in Asheville, N.C. and Portland, Oregon. Seems all three brothers claim to live in America’s best beer town.

Larson occasionally mails his brothers a Founders Brewing Co. cap or a sticker proclaiming GR as Beer City, USA. Just to get a dig in.)

The great thing about this speaker series, he says, is that it was standing room only. These Rapid Growth events usually attract about 50 people. So they set up 50 chairs.

But more than 100 showed up, eager to hear experts talk about the future of downtown. 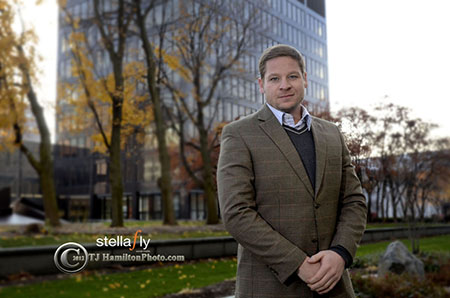 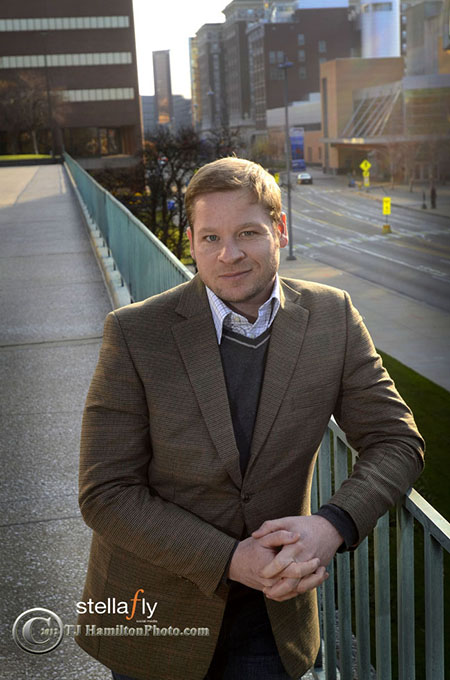 “What we need to do is attract great jobs,” Larson tells the audience. “That’s what people move for. If you don’t have education and jobs down, you’ll struggle — no matter how many arts organizations you have.”

The talk turns to parking lots. The experts on this panel say the city has too many.

Larson has about the same interest in parking lots as he did as a kid. Parking lot? Pffftttttt. That’s no fun. Let’s build cool stuff on ‘em, he says, places where you can go spend your allowance.

“You have to find new and innovative was to engage people,” he tells the crowd. “That’s how you build civic pride. And civic pride is one of the most valuable types of currency we have.”

The next day, back at his office on the ninth floor of City Hall, Larson tells about a cool idea he thinks will engage people.

The 120-year-old former railroad bridge will soon get a $1.4 million makeover, funded mostly by the DDA.

“That bridge is iconic,” Larson says. “It’s the most requested spot in town for brides. People identify with it. So, what color should it be?”

Soon, you’ll get a say — with a new app on your smart phone that will let you envision the bridge wearing any color you like.

He loves this idea.

“It’s much better than coming down at 7 p.m. to some dank elementary school auditorium to have grape juice and listen to some boring talk about what color the blue bridge should be,” he says.

“People love to pick up their phone and mess with an app. If I can get 10,000 people to do that, it’s much more telling than 20 people at a meeting.”

Larson came to Grand Rapids with “fresh eyes,” he says, and liked what he saw: a river rife with opportunity, generous and visionary philanthropists, residents he calls “West Michigan nice.”

His wish list for this place: more people on the streets. More residential units downtown. More retail — we need a grocery store, he says.

“People on the streets add vitality,” he says. “People out walking their dogs creates a safe-feeling urban environment.”

City building is about more than bricks and mortar, Larson says. Anybody can help — just by coming to an event downtown and adding energy to the place.

Larson grew up in Raleigh, N.C., the middle kid of three boys.

“I was always a pleaser, a negotiator,” he says. He smoothed things out between squabbling brothers, always wanted to make his parents happy.

Colleagues at his last job in Long Beach called him “The Translator,” praising his way of connecting the public and private sectors.

Part of his job, he says, is getting the public on board with innovative ideas, so when the DDA goes to the elected officials, they don’t have to worry about risking their positions.

Even though there were good schools in the suburbs, his parents sent him to a magnet school for gifted and talented kids in the core of the city. Theater, art and music were part of the curriculum. He got to play his clarinet with the big city symphonies as a middle schooler.

Raleigh had a historic neighborhood of old homes much like Heritage Hill, he says. Lots of city teachers lived there, including the family of his best friend, Andrew.

“That exposed me to downtown,” he says. “I learned that it was such a different kind of place. Back home in my neighborhood, there was no commercial use. I couldn’t buy a stick of gum. If you wanted to go anywhere, you had to get your mom to drive you.”

Andrew’s family let a homeless man live in their basement for a couple days until they could help get him housing.

“It was the first time I saw a homeless person,” Larson says. “And nobody was freaking out about it. It was just a person who needed help.” 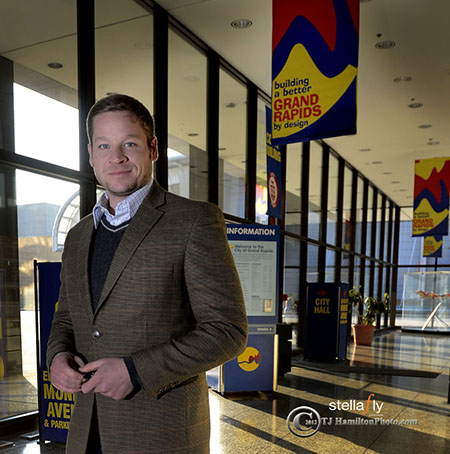 That stuck with him. Today, he gripes about public benches that include a divider, designed so nobody can sleep on them.

Some people struggle with substance abuse and mental illness, he says, and that leads to homelessness.

“We shouldn’t be ashamed of it,” he says. “The job of a community is to help lift the whole — not just the self.

“So much of peoples’ perception of cities is based on fear,” he says, shaking his head. “I try to deconstruct that.”

He’s always been a guy of action, he says.

He started working at age 13, washing dishes at a catering company. By 15 he was the manager of the country club snack bar.

He grew up planning to be a doctor, even ending up president of the pre-med honor society in college.

Then, volunteering at a doctor’s office, he was put off by how much the physicians had to cater not to their patients’ needs, but to the rules of the insurance providers.

He joined AmeriCorps, the federal program whose members offer service to a community for a year. Larson ended up in Moreno Valley, Calif., a poor, sun-baked town, where he worked with school kids in programs “designed to help them develop a passion for something besides basketball and video games.”

“That’s where I began to understand the importance of civic pride,” he says. “That community had no heart. It was just a grid. There was no central gathering place, no defining character, nothing to tie a person to the city they came from.”

He became intrigued with architecture, design and planning. He went back to school and earned a master’s degree in public administration, specializing in urban management, planning and economic development from North Carolina State University.

The bottom line of all that, he says: “How can I help people have more love for their community?”

He talks a lot about civic pride. Grand Rapids has it, he says. He looks forward to building on it.

“It builds a sense of responsibility, of taking care of your neighbor,” Larson says. “It’s how we meld together to make something bigger than all of us.”