The party kicked into full swing quickly as the corporate sponsors gathered to celebrate the start of ArtPrize’s seventh year (#ArtPrize7).  The HUB facility was a beehive of activity with music, laughter, and of course… ART!  The evening was generously sponsored by Adtegrity and Comerica Bank.

From the parklet out front of the building that was installed in just four days to the “Double Crown” winner of both critic and viewer’s choice, Intersections, in its new semi-permanent home (actually a steel replica of the original, but who cares it’s still amazing/awe inspiring #steelcase) one thing is clear- the art is back in town!

END_OF_DOCUMENT_TOKEN_TO_BE_REPLACED 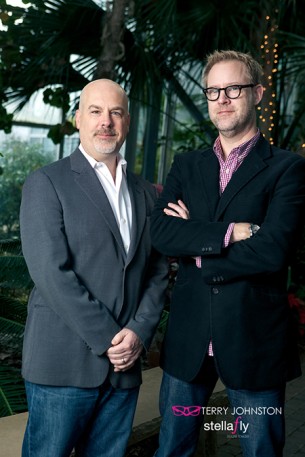 GRAND RAPIDS – Imagine a place where the most creative minds in West Michigan congregate on a regular basis Monday through Friday to share ideas and collaborate on projects that shape the business landscape.

It is the very place Steve Frazee and Bill Holsinger-Robinson are designing.

Frazee and Holsinger-Robinson, co-founders of HUB Grand Rapids, are leading a plan that combines a stimulating workplace with a highly charged social atmosphere where the seeds of regional economic development are planted and nurtured to produce positive outcomes in the community.

You might think of it as Facebook with bricks and mortar, windows and floors, inner-glass partitions, coffee stations, offices and common areas that form the epicenter of local economic growth.

“Imagine HUB Grand Rapids is the social club of the most creative and forward-thinking people in the community,” said Frazee, whose personal bio at hubgrandrapids.com aptly describes him as an entrepreneur, consultant and evangelist for the power of business to create a healthy world. “You’re in your office and you’ve got a team of people who are tying to solve your problem or innovate something, and they’re like, ‘We need to get away from the office. Where do we go?’ They’ll go to HUB Grand Rapids.”

Investment dollars are lining up from impressive local sources, and both Frazee and Holsinger-Robinson, who ran ArtPrize during its first 2½ years of existence, are close to announcing more than 10,000 square feet of office space in a building located within the technological SmartZone in Grand Rapids.

Full details about the location are expected to be forthcoming this month. 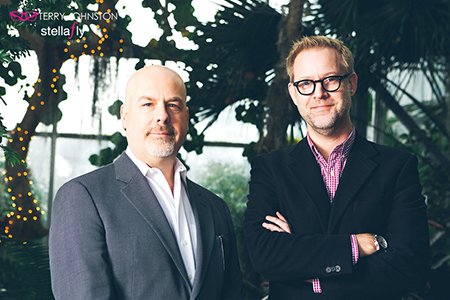 “It’s all about developing a community of creative people, knowledge workers. It’s the core of the super-creative class – the 3 percent of the community who do most of the creative work,” Frazee said. “We’re bringing those people together and giving them things to start to make their lives more interesting and effective.

“We don’t have a space yet, but you can do a lot of work without a space.”

Varnum is on board as the legal partner for the project.

The goal is to attract participants at three levels: investors, partners and members.

It’ll require 50 initial members as anchor tenants, about half of which already have pledged support to the project, according to Holsinger-Robinson, a self-described entrepreneur, strategist, design thinker, technophile and change agent. He sees unlimited potential for HUB Grand Rapids.

It just requires a different mindset to comprehend the infinite possibilities.

“I don’t know if its a new way to do business or if it’s a really old way to do business,” Holsinger-Robinson said. “To a certain extent, it’s about bringing motivated people together to do some really good work in the community, that’s not locked down for single purposes. It’s just getting smart about what our needs are as a community, and it’s a community where we’re trying to drive growth and innovation.”

It has the potential to be as simple – and as productive – as that.

“This is one of the best ways to drive growth and innovation. As a community, if we were specifically all about driving wealth creation and efficiencies, we’d have a very different sort of model,” said Holsinger-Robinson, co-founder of GR Collective and the Frederik Meijer Endowed Honors Chair in Entrepreneurship and Innovation at Grand Valley State. “So much depends on economic constraints, but we’re in a very different space right now where different sets of specific skills and talents are valued again. It’s about the super-creative core of classes that we need to focus on and harness to the best of its abilities.” 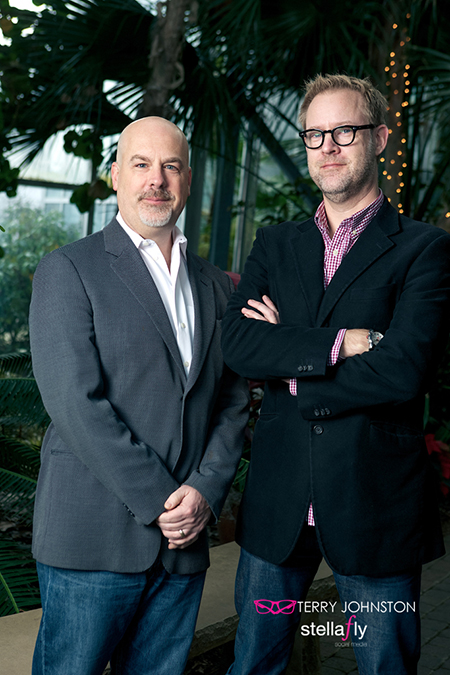 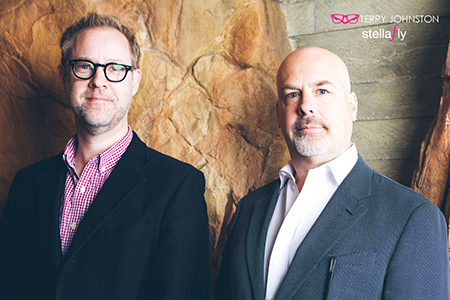 Nurturing ideas in the rainforest

The HUB is the place where social interaction meets entrepreneurship.

Frazee and Holsinger-Robinson were inspired to press forward with plans for HUB Grand Rapids after listening to author Greg Horowitt, whose book “The Rainforest: The Secret to Building the Next Silicon Valley” during a speaking appearance in Grand Rapids in October. They share Horowitt’s outlook that social networks in places like HUB will spur innovation that changes how business is done in the future.

“Human systems become more productive the faster that the key ingredients of innovation, talent, ideas and capital are allowed to flow throughout the system,” Horowitt explains in the book. “Ironically, the greatest economic value is created in transactions between people who are the most different from one another.”

HUBs are an important part of the new ecosystem of innovative thinking.

“It’s a big deal to have one here,” Frazee insisted.

The economic-gardening concept continues to spread.

“You’ve got to get a lot of people together trying a lot of experiments. That’s what happens in the rainforest. A lot of stuff grows, some stuff dies, it’s very organic and it all sort of feeds on itself,” Frazee said. “That’s a new way of thinking compared to the old post-industrialist metaphors that were mechanical and productivity based – with conveyor belts and machinery and cogs. Instead, this is all organic and biologically based.

“What Bill and I are doing is bringing our part to growing the rainforest in West Michigan – the ecosystem of entrepreneurship and innovation. We’re tending that. HUB Grand Rapids is going to be such a fertile spot because it has so much creativity packed into one area,” he added. “It’s the right time because, if you look at what’s happening in preparing West Michigan for the economic future, there’s some catch-up work that has to be done. Specifically around social enterprises, which are businesses with positive human outcomes. There are a lot of people in this area that don’t even know that phrase.”

In the economic rainforest, all things are possible.

“I’ve got an idea and I want to develop it. Where do I go? That’s really the space we want to play in,” Holsinger-Robinson said. “In farming, you predict your yield all of the time within a couple of bushels. Typically, you’re looking for the same yield over and over and over again. It’s repeatable, it’s predictable. The rainforest pretty much is not. It’s about cultivating whatever works well in that particular season and giving it time and a whole series of conditions that you don’t have control over.

“It’s not one crop that we’re looking to harvest. It’s a multitude of things.”

Frazee and Holsinger-Robinson have experience in tending the economic garden. 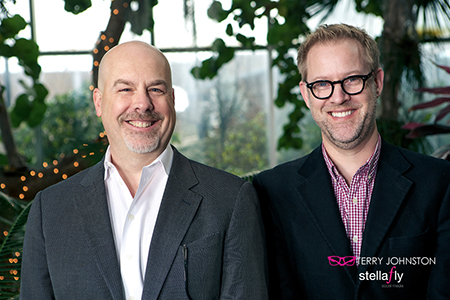 Frazee founded TEDxGrandRapids, part of a non-profit organization that stimulates independent events surrounding technology, entertainment and design in communities around the world. He sees HUB as the next logical step in the evolutionary process of doing business differently in Grand Rapids in the future.

“The new world of economics is about collaboration. It’s about sharing ideas, about working to make things better. It’s not so much ‘me’ against ‘you.’ It’s ‘us’ working together,” Frazee explained. “That frame is so new for some people who built their success on the old-school competition model that we’ll have to spend a lot of time educating and talking and bringing them into this new way of thinking and building trust. If you’re used to a competitive ‘us’ versus ‘them’ model, we’re talking about building the ‘we’ space where we all work together.

“It’s a huge paradigm shift. That’s hard. It’s the hardest thing we have to do right now.”

Frazee and Holsinger-Robinson are enlightening more and more local people.

“We have lots of conversations,” Frazee said. “One of the reasons I like this area is there’s a chance to have an impact. You can have an impact in crafting the personality of the area, because that’s what’s happening right now. It’s not fully baked right now, whereas, if you go other places, it’s already fully baked.

“The old models are based on hierarchial command and control. So, somebody has to be in command and control,” he said of changing the thinking about doing business as usual. “Some of the work we’ve done recently and talking to people about what we’re doing, there’s a lot of, ‘What’s going to be the actual outcome?’ This is self-organizing, which is the way everything is going. It’s a biological metaphor.” 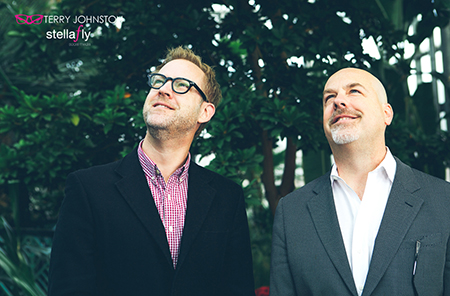 How it all fits together

HUB Grand Rapids will serve all sorts of people in the business community.

The fund-raising goal of $500,000 is expected to come from anchor tenants or investors, participating businesses that rent space in the building and individuals wanting to be part of the collaborative atmosphere. If all goes well, Frazee and Holsinger-Robinson said the HUB location could open by May.

There are a multitude of membership levels (monthly dues):

The initial goal is for 231 members in the first year of operation.

That number is expected to more than double to 464, reaching full capacity in subsequent years.

“The HUB network is a huge global trend,” Frazee said. “This is not a new idea, it”s just new here. All of these facilities have been able to raise the start-up capital from their communities. We’ll get there.”

HUB Grand Rapids hosted an introductory gathering prior to Thanksgiving.

It was the first of what Frazee and Holsinger-Robinson promise are many more events spotlighting the organization in the months ahead as it finalizes preparations for becoming part of the actual landscape here.

“In many ways, Grand Rapids is an amazing place, which is why I’m here. In many ways, however, it’s behind the times. Why is this the right time for HUB Grand Rapids? Bill and I are trying to bring West Michigan into the future – and not just following what other people have done, but really trying to lead,” Frazee said.

“I feel confident by the middle of next year, this will be one of the key places to hang out to get things going with truly awesome people. The expectation is that when corporations send their people here, magic will happen,” he added. “That’s our job – to create an environment where the magic happens.”

Holsinger-Robinson is looking forward to that coffee-shop atmosphere taking shape. He and Frazee have consulted with architects and designers, had a local construction firm prepare a bid for the planned space and expect to formally announce those plans in January or announce HUB Grand Rapids is seeking a different space.

Either way, it’s all happening.

“It’s the best of the places where you go when you need to get heads-down work done. It’s the best of the social environments where you go to share ideas. It’s the best place you go where it’s business, or even as an individual, you’re excited to see your brand be a part of it, and you’re proud to show your logo around the building,” Holsinger-Robinson said. “It’s a coffee shop. It’s a little loud, a little cozy and you know everybody when you walk in. You not only share social things with them, but you also open yourself up to vulnerabilities to share that crazy idea you had in the shower this morning.”

He explains all of this, naturally, while sipping coffee at a hot spot on Wealthy Street SE.

It doesn’t matter whether it’s a rainforest or a coffee shop metaphor. HUB Grand Rapids is putting the most creative minds in local business in the same space to collaborate on difference-making ideas.

“That’s why so much cool stuff happens in coffee shops,” Holsinger-Robinson said.