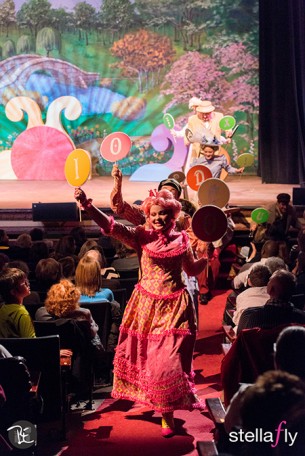 You don’t have to be able to spell it to sing it … and trust me when I say, you’ll be singing it into the next day when you see Mary Poppins fly over the Grand Rapids Civic Theatre stage in this wonderful new production for all ages. Song and dance, delight and drama— you’ll walk away asking yourself, what does this story mean to me? The sound of familiar melodies and tapping of feet will keep you on your toes, from the moment the world’s favorite nanny arrives with her carpetbag and umbrella.

I’m not going to lie, I’ve never been much into musicals but I took a chance on Mary Poppins as a way to spend a fun night out on the town with my two teenagers and tween. Each had only seen the movie, never read the book and didn’t really seem overly enthused about putting their iPhones down long enough to pay attention to a musical about a glorified, flying babysitter. But they were pleasantly surprised.

Act One opens with in the London home of the affluent Mr. and Mrs. Banks who are searching for a new nanny as their busy lives are consumed with work and social parties. Mr. Banks, played beautifully by Matt Ablan, is focused on precision and order, making lots of money and having nothing to do with any of the domestic responsibilities of family while Mrs. Banks, Chelsea Herrema, is a noticebly unhappy wife, under-valued by her husband and unable to pursue her own interests in acting.

The magical Mary Poppins, Alyssa Bauer, enters the Banks home unexpectedly and without invitation to take over the care of their young son and daughter, played perfectly by School of Theatre Arts students, Abbie Westers and Alex Sullivan. 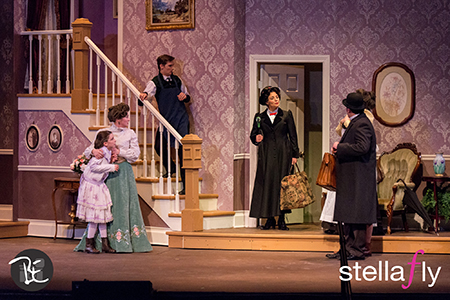 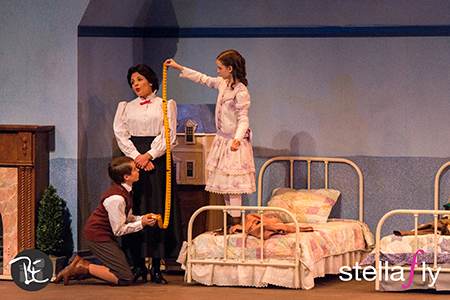 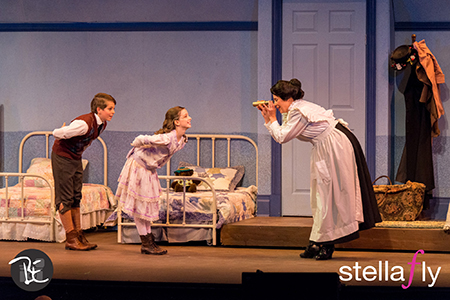 As the story plays out, Mary Poppins introduces the Banks children to the beauty of experiencing simple things like walking in the park, fraternizing with chimney Sweeps, cleaning up messy kitchens and even showing appreciation to the bag lady who takes care of the birds. As the children become more engaged toward the end of the act, they enjoy a scene with crazy, dancing friends. In the meantime, Mr. Banks, a banker, loses an opportunity by choosing to loan money to a man of character rather than a man with a good idea who didn’t care about the people he would hire. He ends the Act uncertain about his job security. 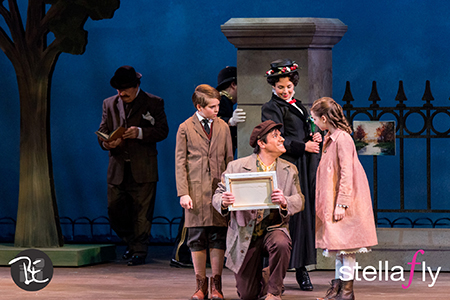 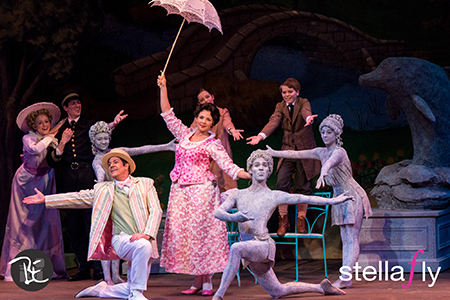 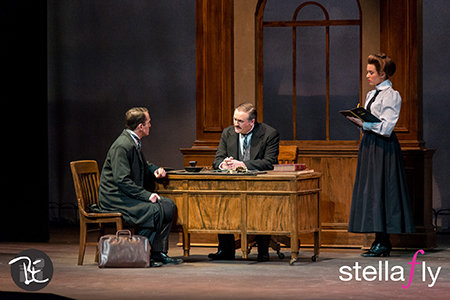 Favorite Scene. Act 1: Scene 9 Mrs. Corry’s features colorful costume, the popular song Supercalifragilisticexpialidocious, dancing and wildness. The entire audience got into it and there wasn’t one person that wasn’t smiling. 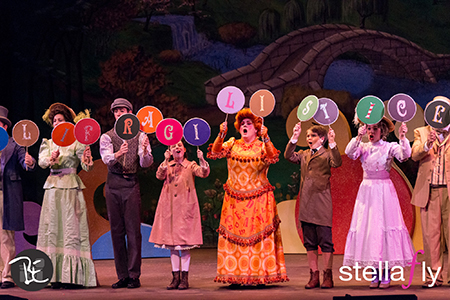 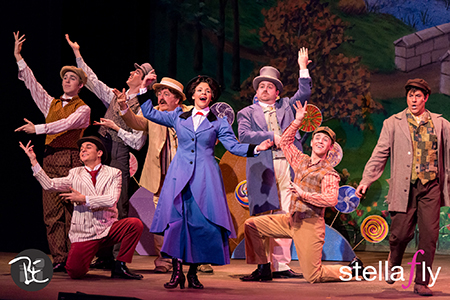 Other recognizable songs in Act 1 include: Practically Perfect, All My Own Walk (Chim Chim) Jolly Holiday, Let’s Hope She Will Stay, Being Mrs. Banks, Winds Do Change, A Spoonful of Sugar, Precision and Order, A Man Has Dreams, Feed the Birds, Supercalifragilisicexpialidocious, The Winds May Blow and Playing the Game. 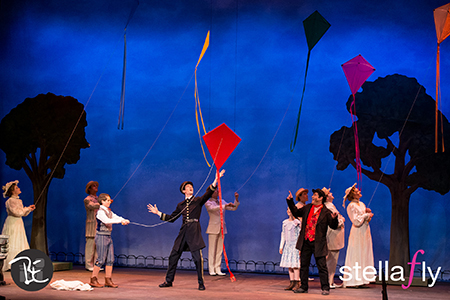 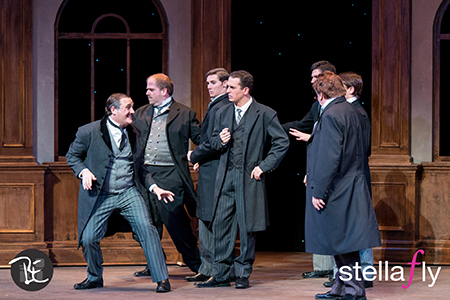 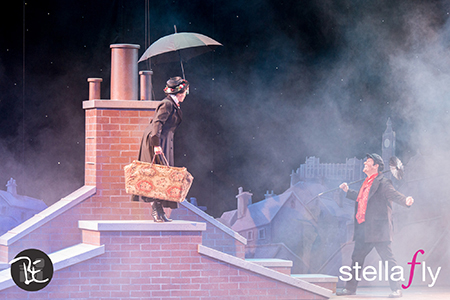 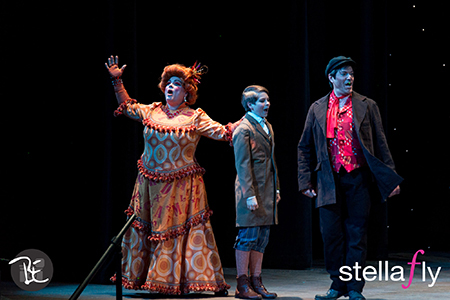 Act Two: The stress of the impending job loss has Mr. and Mrs. Banks holding on to each other for support while the children continue to experience simple pleasures like flying kites. Young Michael had always wanted to learn how to fly a kite but his father was always too busy to teach him. He learns how to fly one in scene 2, 3 and 4. This leads into the introduction of Miss Andrews, the nanny who had raised Mr. Banks. Miss Andrew is far more about Brimstone and Treacle than Poppins’ approach with Spoonful of Sugar. The entire family is turned upside down. This leads into The Rooftops of London scene where Poppins disappears. 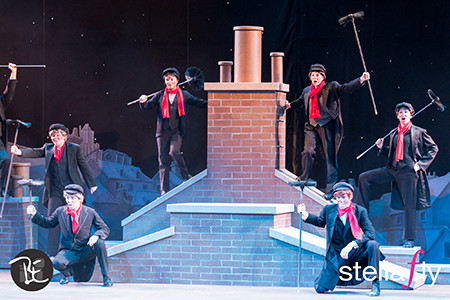 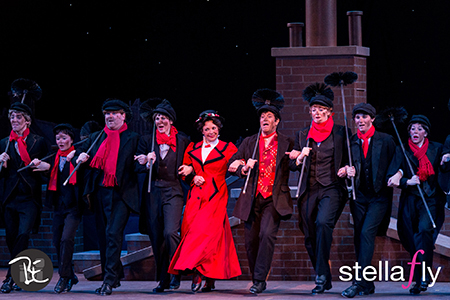 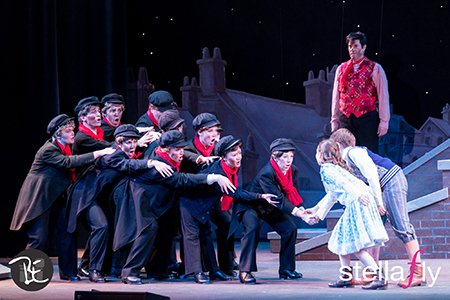 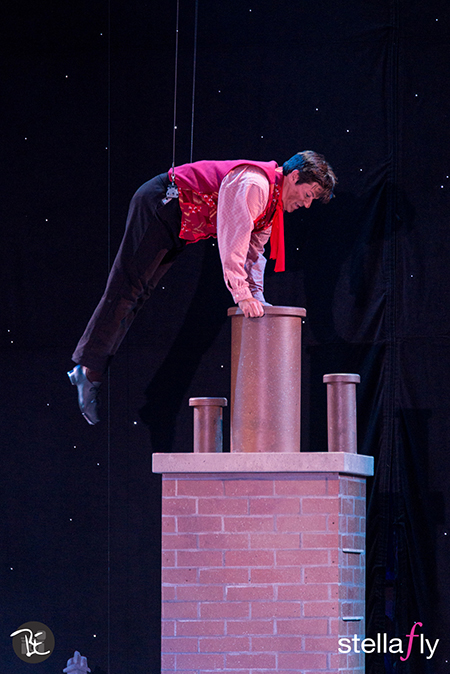 Best scene: Scene 8 & 9 The Rooftops of London features the Chimney Sweeps singing and tapping to the song Step in Time. The Sweep, Bert, played by William Schutte, serves as the narrator through the play. The talent in this scene was outstanding.

Mary Poppins returns once again flying in with her magic umbrella. She has a run in with Miss Andrew, and finds herself back at the helm with the Banks family. At the same time, Mr. Banks meets with his boss, Admiral Bloom, played by Steve Place, to learn that he had invested in the right man and his choice had made them a ton of money!

As the old saying goes, all’s well that ends well. Mary Poppins recognizes that her work was complete and Mr. and Mrs. Banks reorganize their priorities to focus on family.

Final thoughts: This production was incredible. Standing ovation kind of incredible. It was abundantly clear that Director Penelope Notter had tons of fun putting it together with over two hours of action that entertained seniors, teenagers, all the way to babies. Everyone in the audience was engaged in this production. It made me realize how completely awesome it is to have this great venue in our little city. Grand Rapids Civic Theatre will have the stage set for this charming and exciting production through December 14. Tickets are already in limited supply so be run, don’t walk to www.grct.org to get yours now!