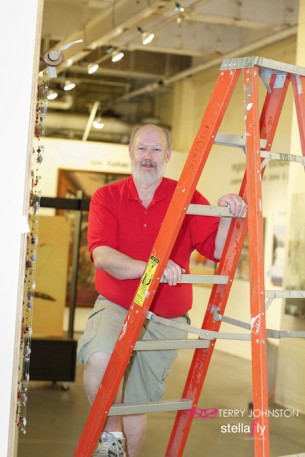 There’s a giant gorilla staring at Fred Bivins from one side and a creepy creature with horns closing in from another.

Head for the flower garden, Fred! No, wait — the beach!

When you’re surrounded by 354 pieces of art, you can change your scenery with a quick dash. 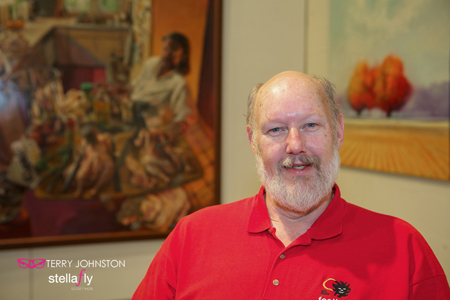 Bivins, 62, is in his element amid the Festival of the Arts Regional Arts Exhibition, a part of Festival that has been in his care for 38 years.

But it’s never been quite like this — with stacks of old newspapers laying around.

The annual exhibition of cool art opened Friday in the former Grand Rapids Press headquarters on Michigan Street NW downtown. The building was purchased in January by Michigan State University for its College of Human Medicine and is mostly empty, although a smattering of employees still work there. 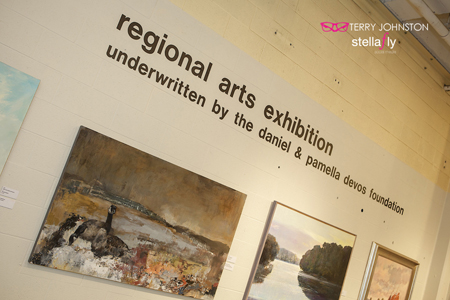 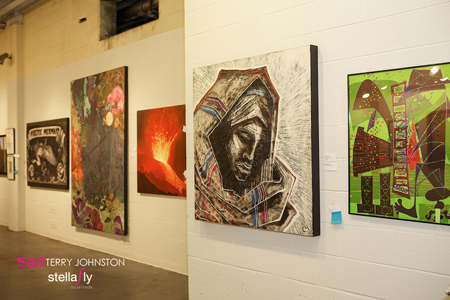 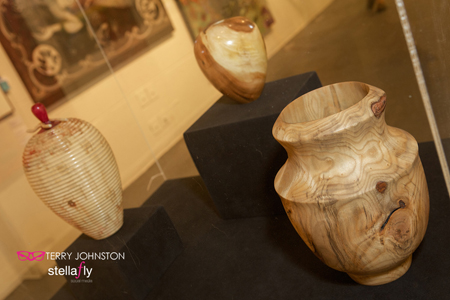 Somebody mentioned the former Press building. He took a walk through, and when he got to the cavernous deserted mail room, formerly used to sort and stuff inserts in newspapers before delivery, “I said, ‘This is it!’” he recalls. “This is what I want.”

But it’s been a challenge. He had to install display walls down the middle, paint the place, rig lighting. He’s been toiling to get the space ready since the beginning of May.

“Isn’t it great?” Bivins beams. “It’s a cliché urban, trendy, hip industrial space that everybody loves for art these days.”

Bivins knows Festival draws people to art who might not seek it otherwise, and he loves that.

Last year, when the exhibition was at the Grand Rapids Art Museum, “the most common statement I heard was ‘This is the first time I’ve been in this building,’” he says.

What a shame, he notes.

“Once you get a roof over your head, and air and food, you’ve got sustenance,” he says. “But do you really have life? This is what makes life worth living — art.

He laughs. He cracks himself up a lot. 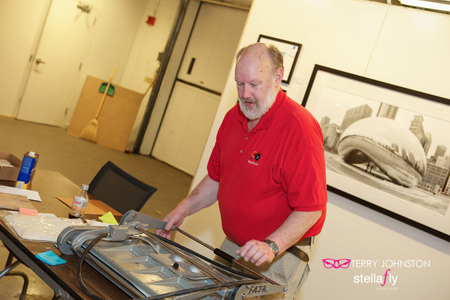 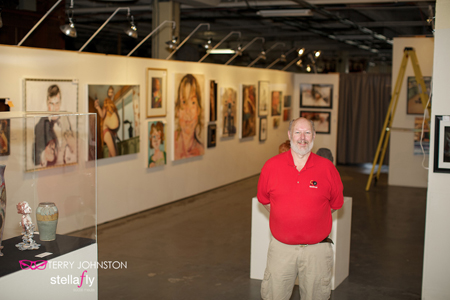 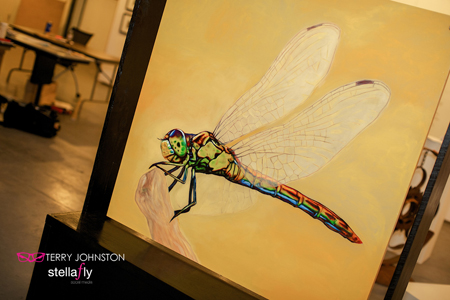 Bivins has it in a lot of ways.

He prints his own Christmas cards every year on a 1911 Chandler & Price letterpress.

He turns chunks of wood into exquisite high-end bowls that are famous. One is on the cover of a Godiva chocolate flier, filled with chocolates. Grand Rapids Mayor George Heartwell buys the bowls to give foreign dignitaries as gifts when he travels.

When Bivins talks about the process of making one, he’s a poet:

“Almost nothing can compare to the feeling of producing something that looks the way you want it to look,” he says. “Taking a chunk of log, putting it on the lathe and turning it into a bowl. The sound, the feel, the smell. The shavings in the air. The water coming out of the green wood.” He grins. “You get soaked.”

His artistry continues in the kitchen. Once a week he hosts a passel of friends for “spaghetti night,” but more than spaghetti happens there.

He makes vats of his special “Fredducine alfredo” to serve the crowd. Friends help him bake up chewy, crispy loaves of ciabatta bread, pizzas and calzones that go in and out of a huge commercial pizza oven he bought at an auction.

If the guests are really lucky, Bivins treats them to gooey caramel and pecan-studded rolls, affectionately called “Fred’s sweet-ass buns.”

The tables are covered with white paper, and bowls of crayons and markers are set out. Draw, please.

The camaraderie is as much sustenance to Bivins as the food. He loves people. His wife, Gina, public programs manager at the Grand Rapids Public Museum, likes to tell how everybody he meets becomes his new best friend.

It’s hard to get rid of Bivins, if you wanted to. After high school he landed a job at General Motors, then stayed there for 31 years, first in production, then as an electrician. He was a big union guy.

He’s been part of the fabric of Festival for decades. He’s worked food booths, printed Festival flags and serves on the Festival board, spending three years as its president.

He’s been emcee for opening ceremonies since 1985, each year wearing a shirt he makes out of that year’s Festival flags.

This year, he loves it that his beloved art exhibition is in a sort of quirky place. He asked for bundles of newspapers to place around the room.

“I want to bring a sense of The Press into this room,” he says. The Press printed the exhibition program on newsprint for him, in broadsheet style, like a newspaper.

He should know. He has a lot of stuff. He collects bricks. He has two from virtually every building in town that’s been torn down. He’s not above climbing fences to get them. 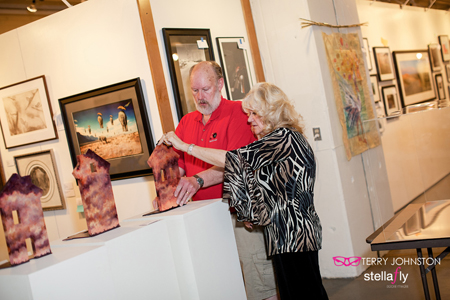 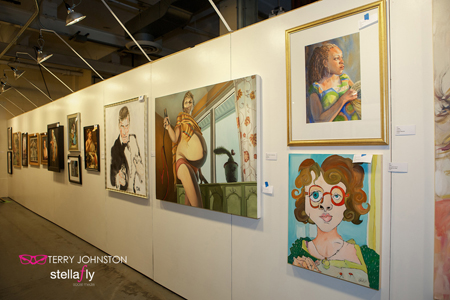 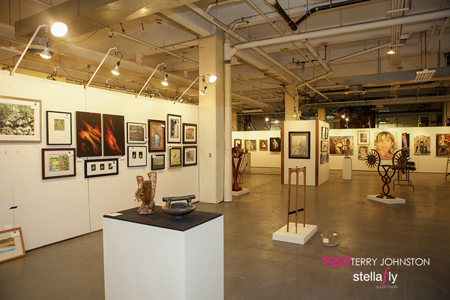 Bivins has a love affair going with his community. He recently hosted print making workshops where guests printed brown paper lunch bags for Kids Food Basket, the nonprofit that supplies nutritious sack suppers to 4,800 kids a day who struggle with hunger. Later he hosted a fund raiser for the charity.

He spent the last eight months on a committee organizing the 150th celebration of his alma mater, Central High School, which drew 1,200 people earlier this month.

He’s been craving the moment when the art exhibition doors open and the place turns from a quiet haven of art to a bustling venue buzzing with chatter.

“Once somebody sees something that inspires them, then it’s the run for the roses,” he says. “If I can be part of something that sparks that creativity, then my life has great value.”

He knows something about the value of life.

He was rushed to the emergency room one night back in 1996 for what he figured was a gall stone, but doctors found a tumor. They thought he had pancreatic cancer. Put your affairs in order, he was told. After a complicated surgery, they discovered the tumor was benign.

Then, three years later, at age 49, Bivins had an enlarged heart and elevated pulmonary pressure. He was told he may need a heart transplant. He might live five years.

He underwent extensive testing for two years but doctors couldn’t find the cause. Ultimately they tried a new drug. It worked.

Bivins had a recent check-up with his cardiologist.

“He said the best thing he could have said,” Bivins says. “He said, ‘Looks normal to me.’”

Bivins likes to say how almost dying twice has a way of making you want to be a good person. It’s given him a kind of wisdom that can catch you by surprise. He’ll suddenly say something like this:

“You never know when the eureka moment comes, but it’s obvious later in life that you had it,” he muses. “But you might not know it till it’s gone. When was the last time your kids crawled in bed with you? You don’t know it’s the last time until it’s gone.”

After Festival, Bivins will dive into ArtPrize, curating the entries displayed at the Women’s City Club.

You just can’t escape art, can you, Fred?

“Why would you want to?”

3 thoughts on ““Mr. Festival” Fred Bivins: “This is what makes life worth living — art””