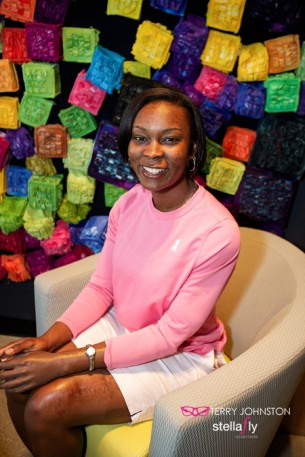 When meeting Danielle Green-Byrd for the first time, it only takes a minute or two before you realize you’re in the presence of a true hero. This strong, resilient woman has endured plenty of tragedy and sorrow in her 35 years, but instead of breaking down, her spirit and tenacity have kept her continually moving forward.

Green-Byrd’s life began in an inner city neighborhood on the south side of Chicago where options were few and dreams not encouraged. With no father around and a single mother who was often on drugs, she realized at an early age she needed to find a way to escape this dysfunctional life. 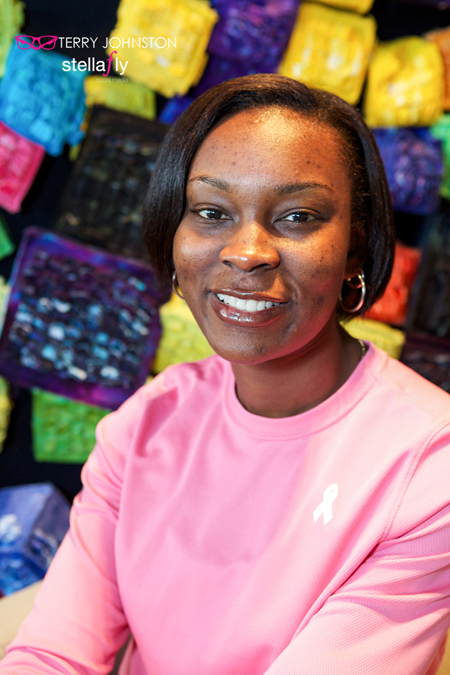 Basketball proved to be the answer.

After watching a few Notre Dame basketball games, Green-Byrd decided at age seven that she wanted go to college there someday. She knew the only way it would happen is if she earned a scholarship, so the determined young girl learned how to play basketball and studied hard to get good grades. Her plan eventually paid off because Green-Byrd was awarded a full scholarship to the University of Notre Dame where she earned a bachelor’s degree in psychology.

A few years after college, Green-Byrd reconnected with a man she knew in high school. Willie Byrd was a basketball coach and physical education instructor she met when she was 16, but they lost touch when she went away to Notre Dame. One day she called him and their mutual love of sports drew them together again. A romantic relationship soon developed.

Green-Byrd enlisted in the United States Army in 2003 to fulfill another childhood dream of hers to serve her country. A year later, in January 2004, she deployed to Iraq as an Army Specialist with the 571st Military Police Company.

On April 27 that same year, Green-Byrd married Willie Byrd in Las Vegas on a short leave from Baghdad. Little did Byrd know then, his new bride would almost die a month later.

Green-Byrd woke up on May 25, 2004 with a gut feeling that something bad was going to happen. With Baghdad temperatures hovering around 110 degrees, she recalls being very hot and not feeling well. Despite the ominous feeling, she and a few other Army Specialists were soon on their way into town for their daily assignment at an Iraqi police station.

Green-Byrd and her team had been training Iraqi police officers there, but when they arrived, no one was around other than the detainees. Any other day, kids and other civilians would come out to greet them.

The team took turns being inside the police station where the AC kept them cool and being on the rooftop on guard duty. Green-Byrd doesn’t know why she went to the roof alone, but she did. Once there, she sat back to watch for trouble.

Suddenly, two rockets whizzed by and nearly hit the Humvee she was riding in a short while ago. Green-Byrd quickly grabbed her rifle and was getting ready to fire when a rocket-propelled grenade hit her.

At first, she didn’t know what hit her or how badly she was injured. The blow knocked her to the side and she instantly felt numb. Lying there, with ears ringing and no feeling, Green-Byrd remembers thinking she was going to die so she started praying. And then she got angry.

The numbness soon wore off and an excruciating pain overcame her. Green-Byrd noticed her leg was injured and her uniformed torn. She then tried to move, but couldn’t. At this point, she still didn’t realize what happened to her arm. All that she knew for sure then was that she was hot, extremely thirsty and blood was everywhere.

When her sergeant arrived, Green-Byrd remembers how big his eyes grew when he found her. He immediately yelled for help and shortly afterward, she arrived at the hospital where they sedated her.

Green-Byrd woke up several hours later to her entire chain of command standing around her bed. She asked them, “Why are you guys looking at me this way? You’re looking like somebody just died.”

Then she realized her left arm was missing from the elbow down.

“It was very emotional,” she says, noting that she was left-handed prior to the injury.

She promptly asked about her wedding rings and discovered her sergeants returned to the rooftop to get them, even against orders. Green-Byrd requested to have the rings placed on her right hand.

Her colonel then presented her with a Purple Heart medal for being injured during combat.

Green-Byrd was transferred to an Air Force base in Iraq, then to a hospital in Germany, and finally, to the Walter Reed National Military Center in Washington, D.C. where she spent the next eight months in therapy.

The occupational therapy proved to be quite challenging, as she had to learn how to write and do everything else with her right arm. She now wears a cosmetic arm that doesn’t move and a functional hook for playing sports, which are still a big part of her life. Having only one arm is tiring and slows her down sometimes, she admits.

Other than a nine-inch scar, Green-Byrd suffered no permanent damage to her injured left leg. One of her proudest moments came when, after only four months of therapy, someone talked her into running a five-mile race and she did it. She’s been running ever since.

After therapy, she returned to Chicago and earned two master’s degrees. Two years ago, Green-Byrd was hired as a readjustment counselor at the Oakland Park Vet Center where she provides individual and group therapy to other combat veterans.

Life finally seemed to be on the right track again for Green-Byrd until her husband suddenly died 18 months ago. When she came home from work one day, she found Byrd on the couch breathing heavily from what turned out to a serious bout of pneumonia. Paramedics performed CPR on him when they arrived and rushed him to the hospital. He developed a blood infection and died four days later.

“He was my soul mate,” Green-Byrd says. “And the only man I’ve ever been with.”

A year and a half later, she confesses to wondering about how long she should keep her hyphenated last name. She’s also been thinking of buying a new home because where she lives now was Byrd’s home and memories of him remain strong in the house. Ideally, she’d like to build a home in the suburbs where she and her grandmother can live together. 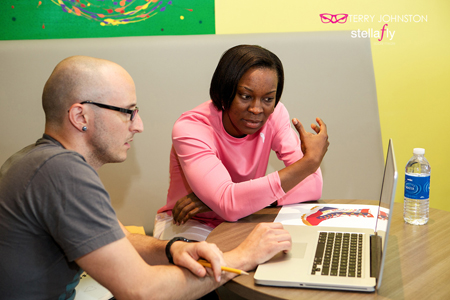 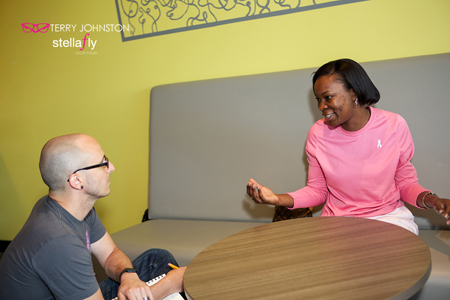 Green-Byrd recently participated in the Fashion Has Heart Corporal Hoffman Design Project in Grand Rapids that pairs a wounded veteran with a designer. She feels honored to be selected for the project and says it’s a great opportunity for soldiers to express themselves in a creative way. She was a little surprised by the red, white, blue and gold patriotic design she came up with, but is pleased with it.

This strong, resilient hero keeps moving forward, no matter what happens in life.

“I’m trying to be happy,” says Green-Byrd. “If I think about what’s happened to me too much, I’d probably spiral out of control and I don’t want to inflict that kind of pain on myself.”

She admits she never experienced nightmares or post-traumatic stress disorder. She believes she’s able to function pretty well because she knows it could have been much worse.

“Eight years ago, I was almost taken away,” Green-Byrd says. “Now I’m trying to enjoy every minute because tomorrow’s not guaranteed.”

The Corporal Hoffman Series Design Project is happening with the help of these partners:

Priceline.com and Booking.com will cover travel expenses for the artists and heroes.

Threadless will produce, sell, and distribute the resulting 5 designs from each hero + designer team.

Bates Footwear will collaborate with each hero to design their own Bates boot.

Grand Rapids Ballet Company will host the “FREEDOM” benefit event for the heroes.

One thought on “Determination, Resiliency and Sports help a Hero Survive”