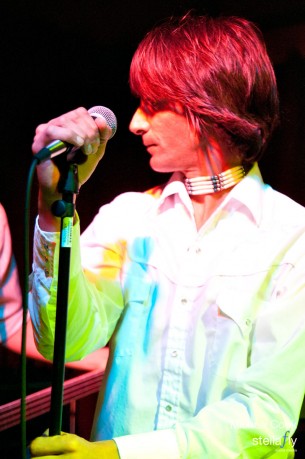 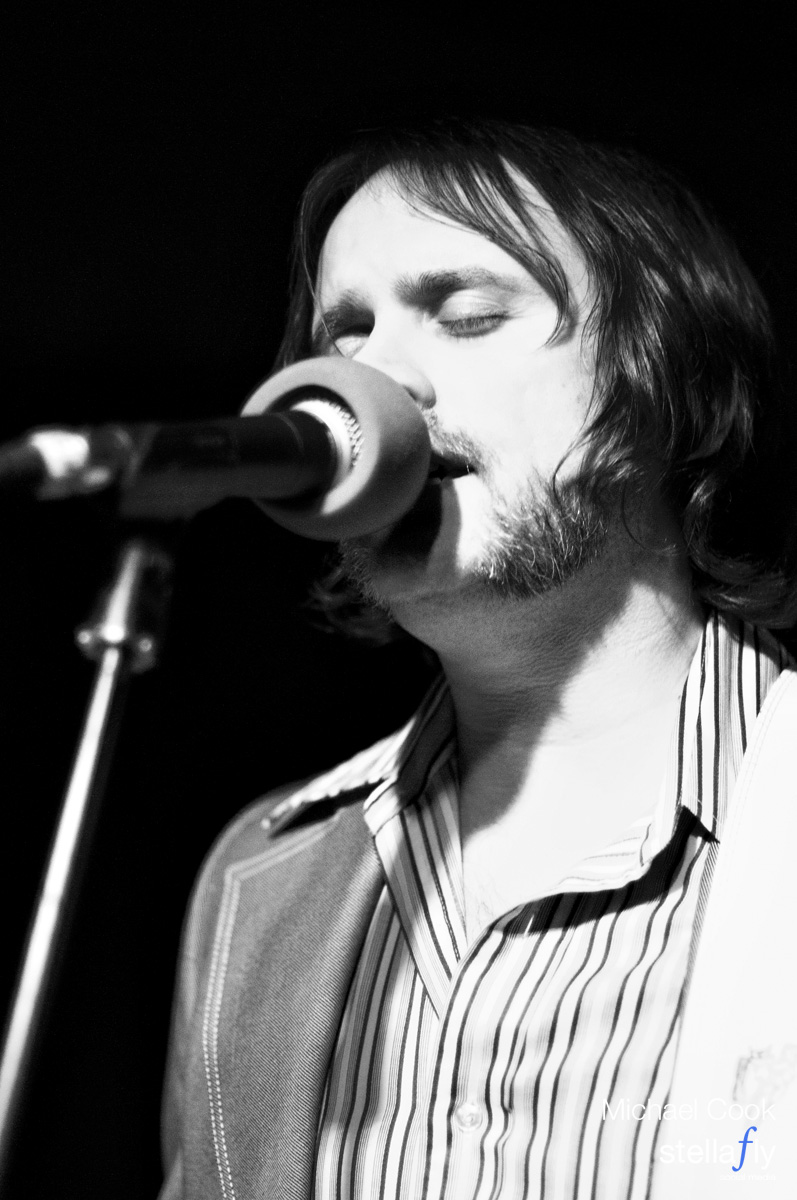 Lend An Ear:
the Fuzzrites May Just Be
Headed To a Garage Near You

The first time you hear a new band it’s tough not to ask yourself: who do they sound like?

So it is with the Fuzzrites, a garage-slash-rock-slash-neo-punk-slash-we-don’t-do-love-songs band with roots in most every rock music genre (OK, no glam or disco) from the early ‘60s on up. They’ve been compared to The White Stripes, the Sonics, the Kinks and early Cavern Club Beatles — but the more you listen the more you realize they’ve come up with a sound all their own.

Taking their name from a classic fuzz box brand produced in the ‘60s by Mosrite, the Fuzzrites play vintage instruments, but with a contemporary sensibility. Band co-founder and fearless leader Dick Chiclet says group’s nod to the past is less about sounding vintage, more about building on the raw purity of vintage sound.

“Much of modern music has no dynamic range,” Chiclet maintains. “It’s who can deliver the fattest, biggest hard-on for three minutes; they scoop out all the mids — it’s either all high end or all low end.”

Chiclet and the band work with the mids. They prefer their music shaken…and stirred. It’s an art, Chiclet suggests and, like all art, it should be singularly distinctive. “Music is an organic experience,” he says. “It’s three-dimensional. When it’s done right, you feel the emotion.”

It’s an emotion that seems to float in the air after a Fuzzrites tune. Yes, the fuzz pedal helps, but there’s an afterglow that says the tune was worth hearing. This, says Chiclet, is what makes listening to music worthwhile.

“I don’t want to just fly high for three minutes and eighteen seconds,” he explains. “I want to sit back and enjoy it.”

So what do you get from a Fuzzrites concert or record? The tunes are straightforward, guitar-heavy and seemingly simple, Yet the playing is nuanced, with subtle touches that give each song its own legs.

As the owner and chief sound man for his own studio, Goon Lagoon, Chiclet takes pride in preserving the texture of the music, not only for the Fuzzrites but for every group that comes in to record. At times, he admits, it takes diplomacy.

“A lot of people don’t understand all these frequencies,” he says. “They just want loud. Or the band sits in and each one wants their own part to get more attention. The band should not be there when a record is mixed. I’ve been there and know what it’s like. I’ve been my own guinea pig.”

He’s been pretty good at it, too. Goon Lagoon has produced music for a number of popular groups, such as the Boss Mustangs, Delilah DeWylde and the Lost Boys, and Ghost Heart, to name just a few. And the Fuzzrites, of course, whose own collection “Baby Cakes” is a local favorite as well as an online CD under the Spinout Records label.

While local music critics and venues have taken notice, so have people outside the area. Chiclet credits social media with helping spread the music, and the word. He recently heard from a deejay in Australia who wanted to hear more of the group’s music. The Fuzzrites are also getting play via college radio stations. All of which adds up to the potential for more CD sales.

It’s a double-edged sword for Chiclet. An avowed analog guy, he would prefer to work with vinyl. But he also admits that people listening to podcasts and downloading songs makes life a little easier.

“It’s a new era,” he says. You don’t have to play live as much or get out and tour. There’s also a lot more competition…but the good bands will get heard. The music just has to hit the right ear. Do that and you can sell bottle rockets to a convent.”

Chiclet is still hoping to hit a few more ears. He’s grateful for the local support — especially WYCE — but he has dreams of getting XM play and, the ultimate, getting air time on Little Steven’s Underground Garage.

You can give a listen and get concert info about the Fuzzrites by checking out the group’s facebook or myspace pages. You can purchase the album at fine music stores locally or on line via Spinout Records. 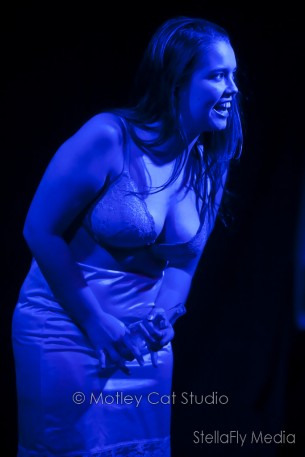 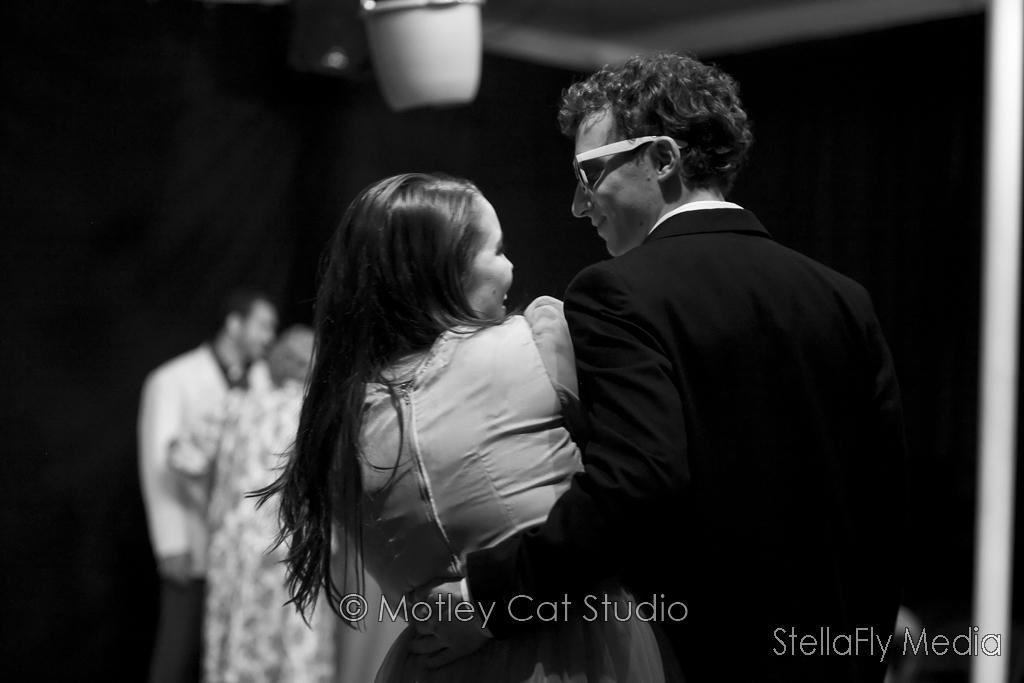 The Stark Turn Players are a newly-formed non-profit theatre group in Grand Rapids. 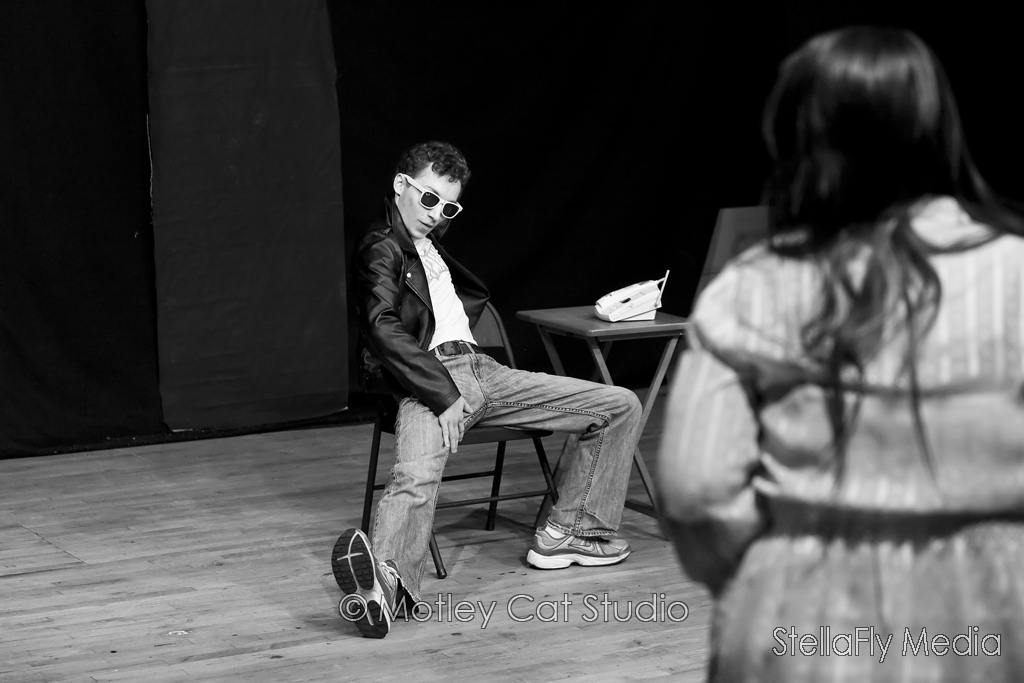 In 1974, three children played a dangerous game of tag, ending up with the death of a little girl, Elizabeth Bacon.  The three swore they’d never tell, but someone saw.  Six years later, as the school prepares for the prom, those three homicidal children start receiving creepy phone calls and suspicions arise.   As the big night approaches, the three start dying off, one by one.  For everyone at Grover Cleveland High School, it becomes a prom night that no one will ever forget.

The show runs at Dog Story Theater, October 26-31st with special midnight showings on October 28 & 29 and a Costume Contest and party with refreshments, prizes and dancing on Halloween night, October 31 at 8:00 pm.

For more information about the Stark Turn Players, go to www.starkturnplayers.org.

Dog Story Theater is a VENUE and does not produce shows. Their mission is simply to provide an affordable, flexible performance space for performers, directors, writers, dancers, comedians, poets, filmmakers and musicians to showcase their work! Check them out on the web: http://www.dogstorytheater.com 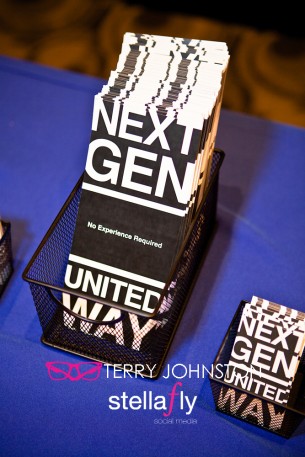 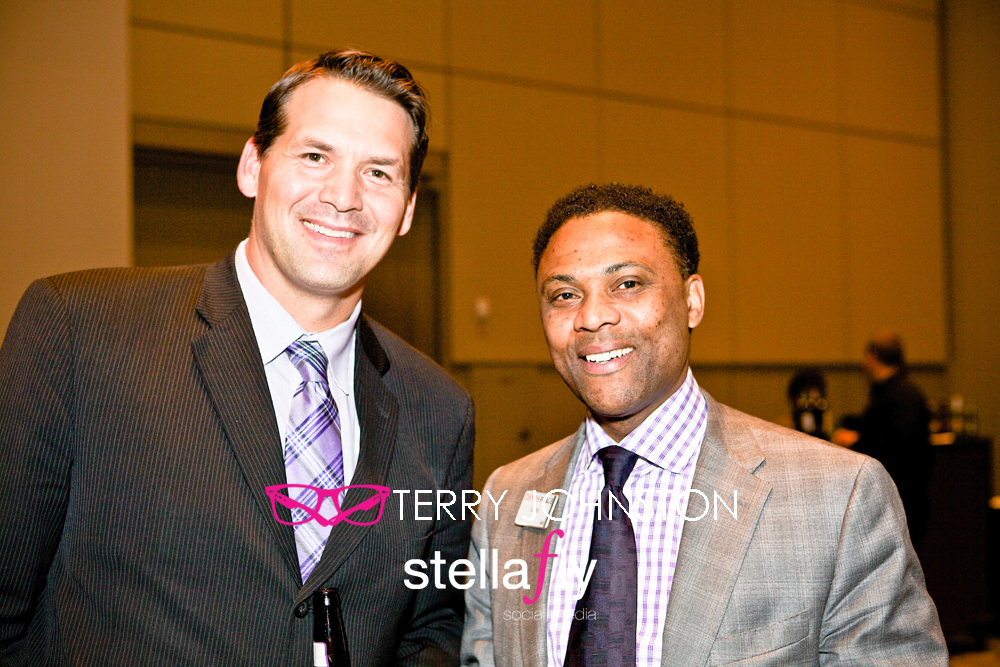 DeVos Place was abuzz Thursday night with talk of how young professionals in West Michigan can give back to their communities. Local organizations BL2END, the Grand Rapids Area Chamber of Commerce, Grand Rapids Young Professionals, the West Michigan Asian American Association, the West Michigan Hispanic Chamber of Commerce, and the Young Nonprofit Professionals Network presented A New Conversation: Give! Creating a Culture of Giving. The night began with an opportunity for networking and visiting with local nonprofit agencies. Organizations such as In The Image and the American Cancer Society were there to talk to these young professionals about how they can give of their time, talent, and treasure. 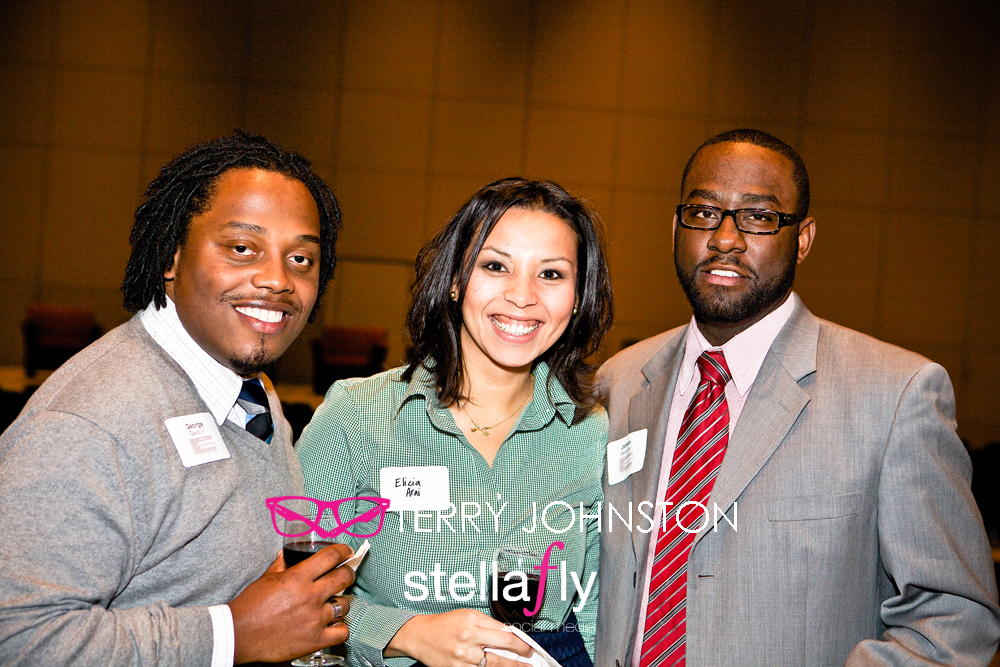 The main event, a panel discussion amongst community leaders about giving back, was moderated by Jamon Alexander of BL2END. On stage to discuss this very important topic were: 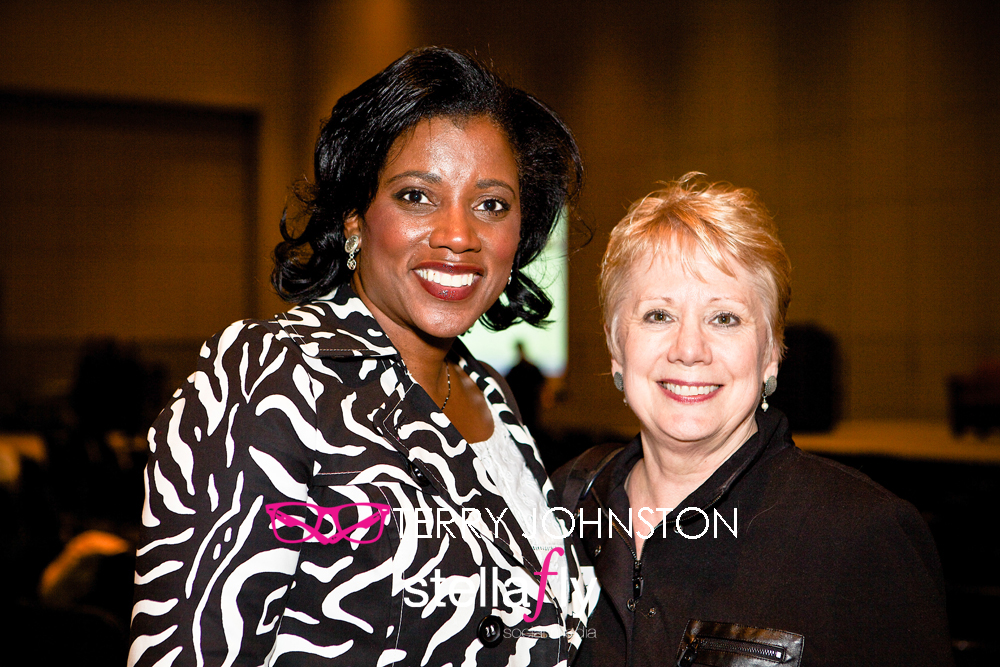 The discussion largely focused on giving one’s time and talent by volunteering. The panelists all agreed—when looking for an organization to volunteer with, choose carefully. Find one whose mission you strongly believe in. Never be hesitant to share your ideas, your fresh perspective, with the leadership in the organization. Who knows? You may just find you’re your next career opportunity—a nonprofit with a job opening may look first at their most passionate volunteers. And remember—it is never too early to start teaching the next generation about giving back.

Grand Rapids is the second most philanthropic city in the United States, and it is up to us to sustain that reputation. So take a few minutes and look around for an organization that is a good fit for you and see how you can give back to them, doing your part to keep the philanthropic legacy alive in West Michigan! 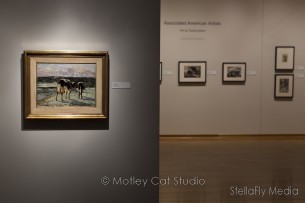 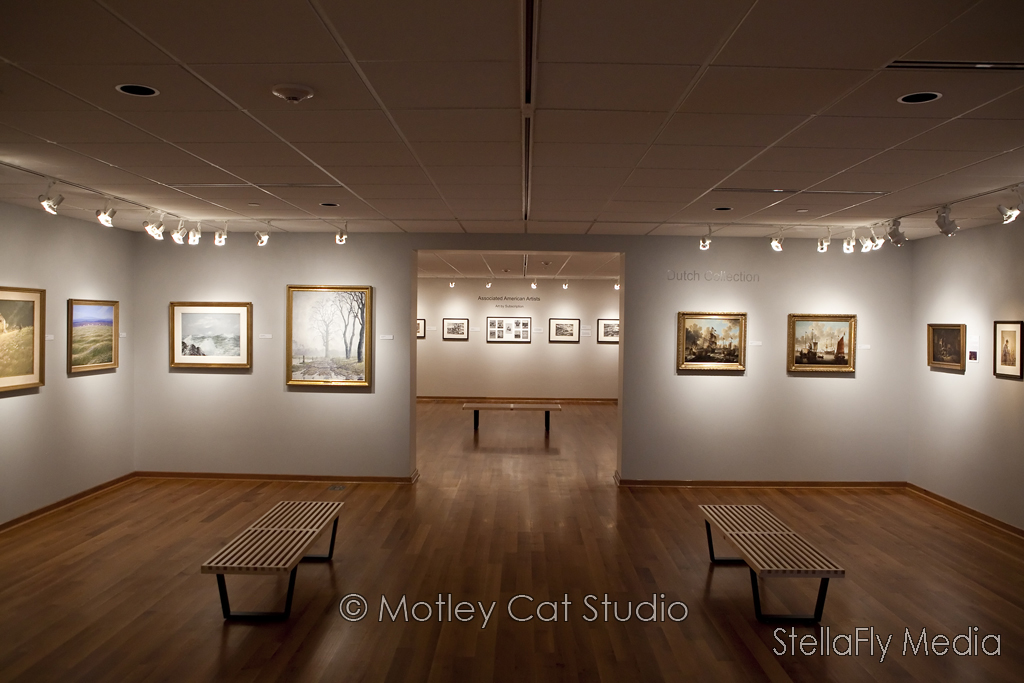 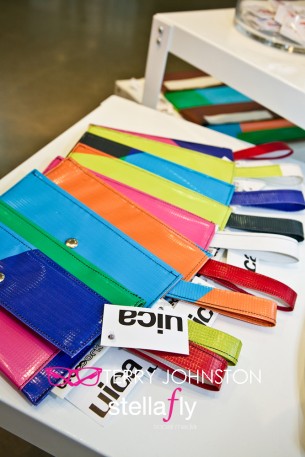 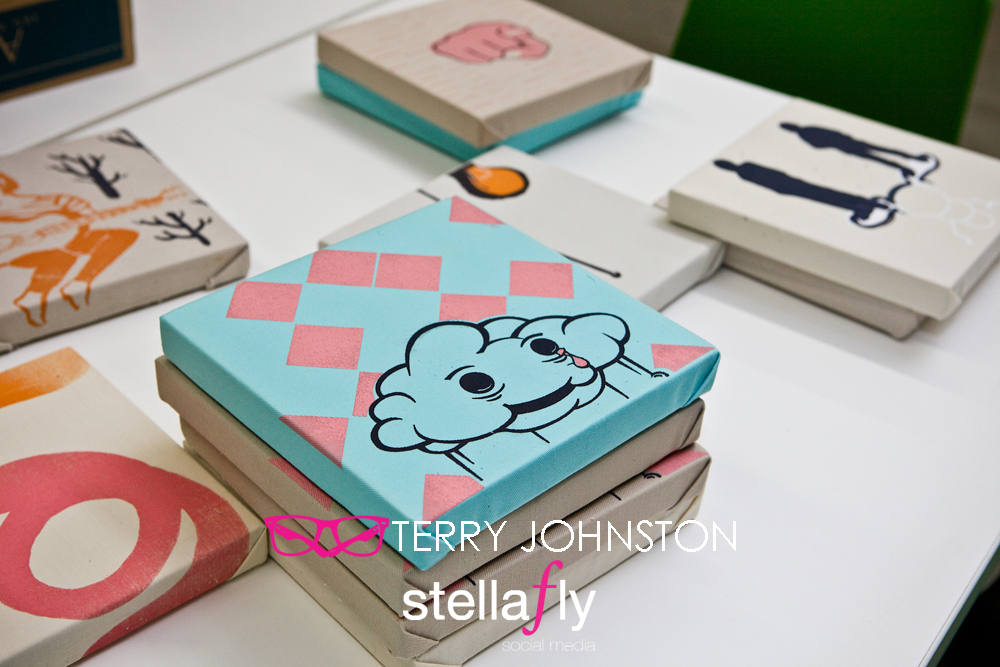 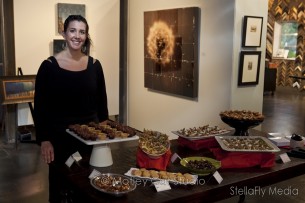 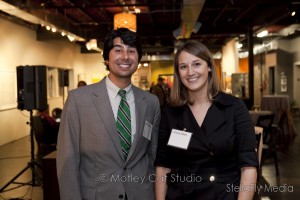 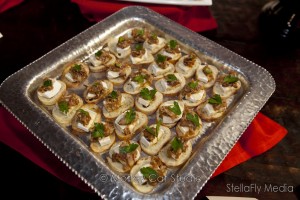 Kate Leeder catered the event and the signature cocktail—Liquid Assets (cider, bourbon and Vernors) was a hit. 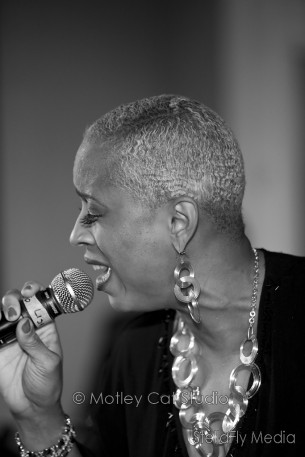 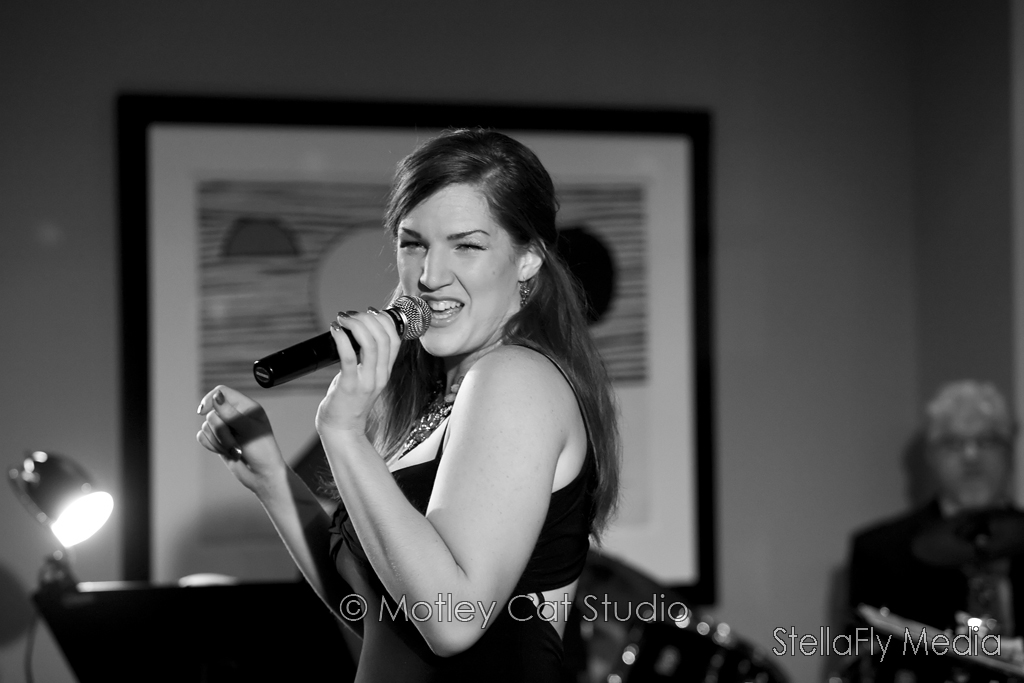 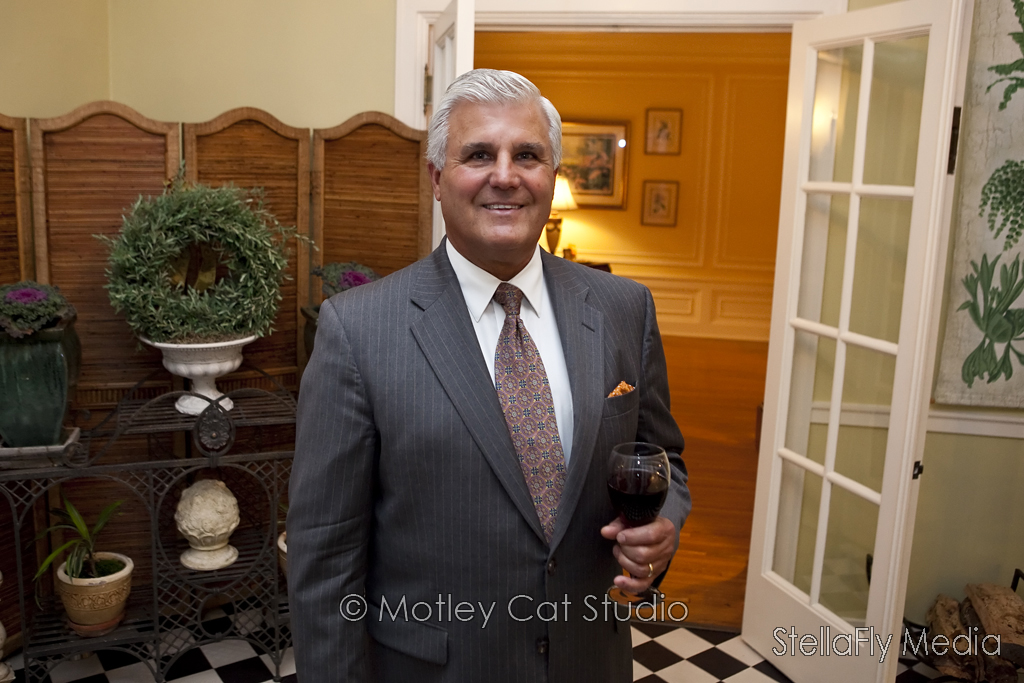 Alumni, staff, and supporters donned Gala-worthy attire and descended on the Lakewood Estate to welcome Aquinas College’s seventh president in 125 years. Circle Theatre, celebrating what will be their sixtieth seasons of performance, brought with them musical selections from the upcoming 2012 season. They also played host to a toast to Dr. Olivarez and his wife Mary, as well as silent and live auctions to raise support dollars for the Circle Theatre.

The event was sponsored by Aquinas College, The Wege Foundation, Lacks Enterprises Inc, and Meijer Inc. and was filled with food, music, laughter, and dancing. Stiletto Sweets even managed to ensure everyone went home with their very own sweet treat at the end of the night.

The Stellafly team was happy to be in attendance – not just for the fun and chances to bid on some spectacular packages, but to welcome back a distinguished alumnus as the President of an outstanding institution right here in Grand Rapids. Welcome back, Dr. Olivarez. 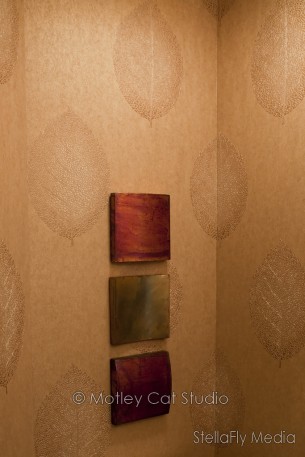 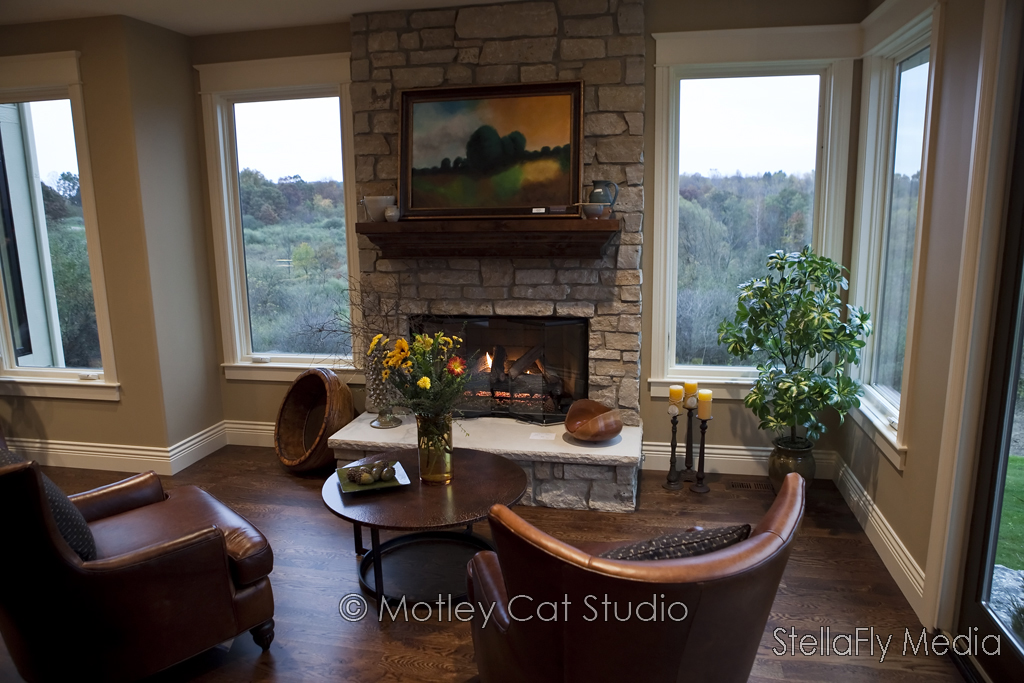 Falcon Custom Homes opened their home to us once again last night to experience another masterpiece situated in the prestigious Terra Sienna development in Ada.

This 2011 Fall Parade home is a refreshing example of style, design, and quality craftsmanship. The home is perfectly situated on a large 2.5 acre lot with commanding views of the wetlands and open spaces below. Inside you will find a home that is designed around family with each room having a purpose. 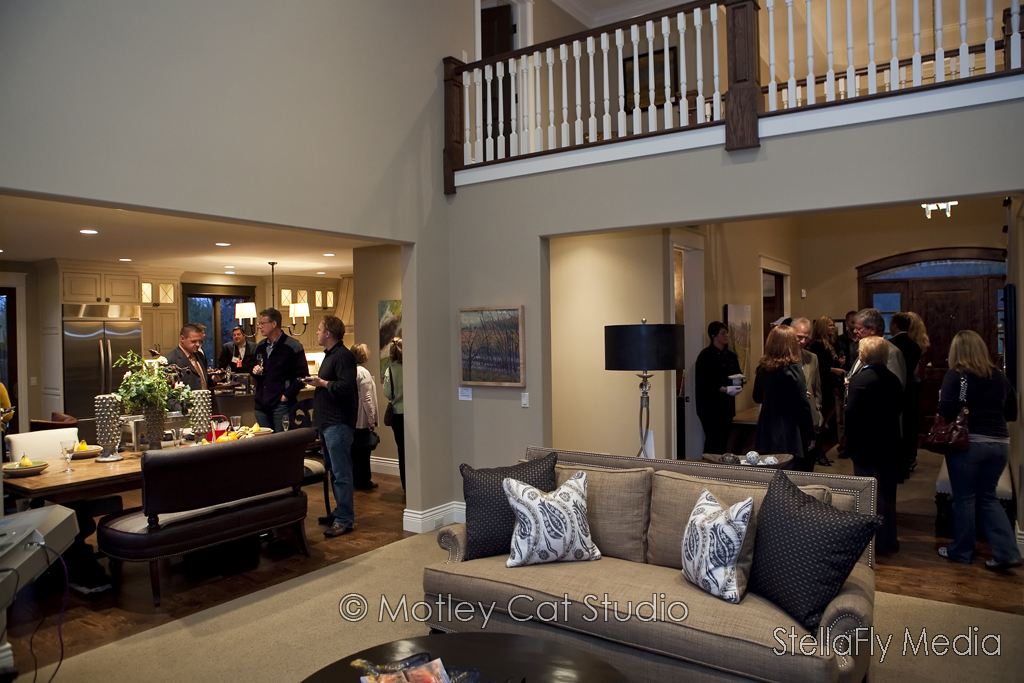 The home is packed with architectural details that truly separate a “Falcon Home” from the rest. Experience the difference with working with a team that works with-in a clients budget, delivers exceptional quality, has great communication, and a high level of detail. We look forward to sharing with you the “Falcon Experience.” 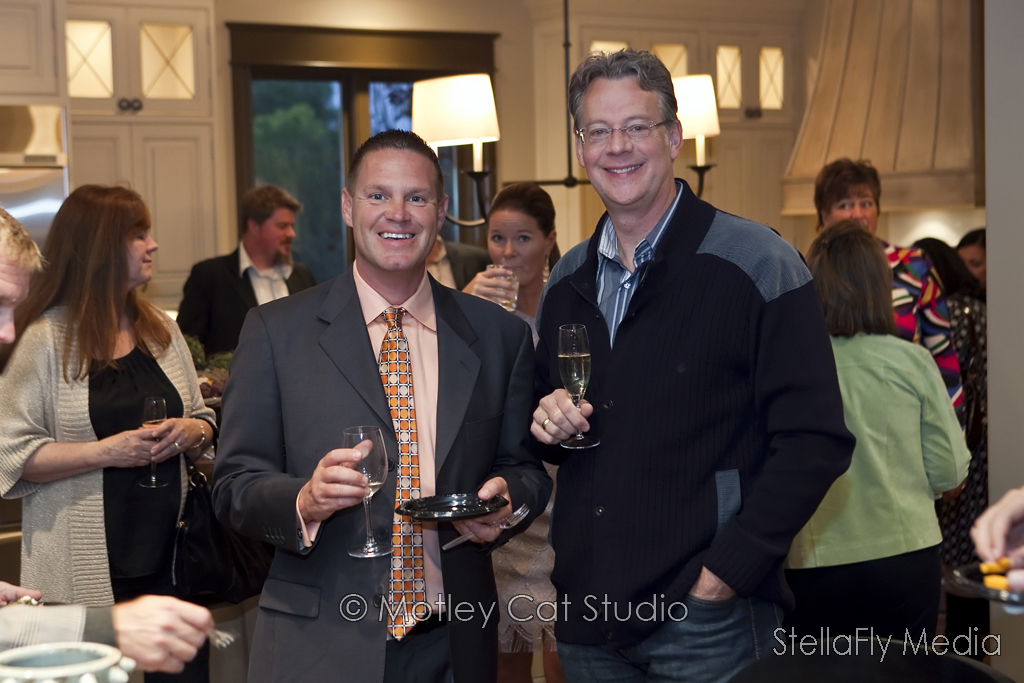 This evening of art benefitted Pine Rest and their Patient Assistance Fund.

Donations can be made here: http://bit.ly/r5BRa7 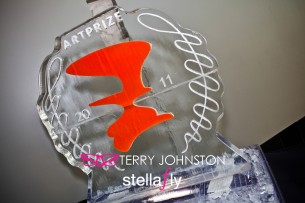 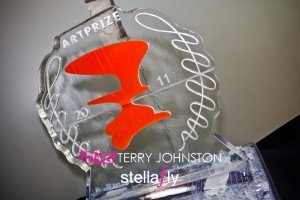 Before the big announcement of the winner of this year’s competition the sponsors, staff, artists, and VIPs mingled and shared a champagne toast to commemorate another successful year of the Grand art experiment, conversation starter, and community event known as ArtPrize.

Around 5pm people began to filter into the Seccia Lobby of the DeVos Place. The floor to ceiling glass windows provided a bath of unexpected October sunshine and a backdrop of people outside meandering and observing the very event we were celebrating. The juxtaposition was not lost on the crowd of VIPs, the room was energized with conversation about the people walking around outside, still viewing the art downtown – even after two weeks of the competition had already passed; even though it was an evening and a Thursday. 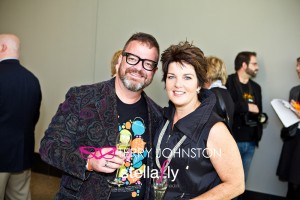 ArtPrize on the web: http://www.artprize.org/